Toward an effective ASEAN strategy against hunger 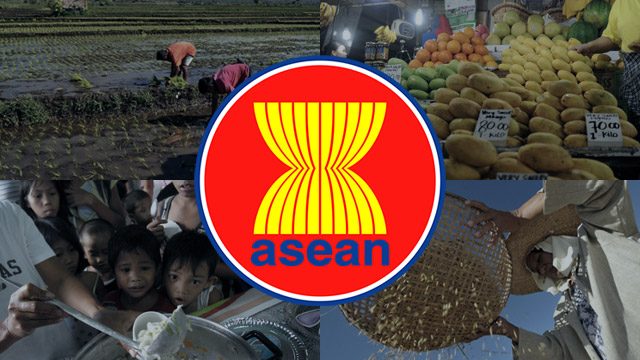 Facebook Twitter Copy URL
Copied
In ending hunger in the ASEAN region, it is important to incorporate priorities in constructed strategies

MANILA, Philippines – Asia is facing a big challenge when it comes to hunger and malnutrition.

The Association of Southeast Asian Nations (ASEAN) acknowledged in a summit in 2012 that food insecurity remains a big problem in the region.

Despite data from the Food and Agriculture Organization (FAO) showing a decrease in food inadequacy, more than two-thirds of the world’s hungry still reside in the region.

What contributed to this, the Asian Development Bank (ADB) found out, is the increase of food prices between 2007 and 2008. The ADB’s 2012 study is the most updated report on the topic of key strategies in addressing hunger in the region.

It is estimated that 100 people fell into the hunger trap due to this, and 64 million people more are at risk if there were an additional 10% increase in prices.

ASEAN, however, has been constantly stepping up its plans to combat hunger and malnutrition – among all problems related to food insecurity – throughout the years.

In 2011, the ASEAN Integrated Food Security (AIFS) Framework was established to “provide scope and pragmatic approaches” toward food security in Asia. Before this, a road map was constructed in relation to the Millennium Development Goals (MDG). (READ: How ASEAN is trying to end hunger)

Despite the “multidimensionality and multi-partnership” of these initiatives, they still fall short.

The economic growth seen in Asia in the past years helped lessen the prevalence of hunger. The impact, however, was “generally low.”

The performance, ADB noted, proves that hunger is “much more difficult to eradicate” as it needed a more practical approach than only using “those concerned with economic growth.”

In trying to end hunger in the region, the strategies – whether policy actions or interventions – should focus on identified critical areas.

According to the ADB, an effective strategy against hunger should have the following priorities:

1. Improve attention at the national level when it comes to hunger elimination

Although countries have vowed to join the fight against hunger globally and at the national level, there are still inadequate efforts done in reality.

The will to end the problem should be reflected in the appropriation of the budget and other resources and most importantly, in policies.

2. Zero in on hunger hotspots and target most-vulnerable

As resources in efforts are scarce, it is better to identify and focus on “hunger hotspots.” These are places where the hunger problem has become chronic.

Aside from identifying these areas, their needs should also be assessed so that assistance – whether international or regional – can be given to end the problem of hunger.

3. Decrease food prices and improve food availability for the poor

ADB identifies the increasing food prices as one of the reasons why people go hungry in Asia. This affects the underprivileged the most who are already suffering from hunger.

Countries then should make an effort to reduce prices of food commodities to level the playing field when it comes to the hunger problem. If this cannot be done, actions should be included to improve the food accessibility of the poor. (READ: How can the government lower food prices in the Philippines?)

4. Improve access to clean water and ensure availability of micronutrients in diets

The effects of hidden hunger are seen in the long run, affecting the performance of the next generation. In order to prevent this, children should be given the right amount of micronutrients in their diets. (READ: Nutrition facts: Hidden hunger)

Meanwhile, access to clean water has been a problem especially in developing nations. This should be addressed to prevent water-borne diseases – one of the main causes of deaths in Asia. (READ: A thirsty world and the PH water problem)

5. Effectively engage public and private stakeholders such as communities, civil society, and the private sector in coordinated and effective multidisciplinary actions

Hunger cannot be fought by the government alone, nor by advocacy groups. The fight against hunger needs to include all sectors as they have the specific skills to address a component of the problem.

However, these stakeholders should effectively coordinate to attain the goal of zero hunger. Each side should then be able to be open – regardless of differences – in working together.

The deadline of the MDGs has passed and unfortunately, not all countries in Asia were able to effectively achieve their targets.

Now the focus has shifted to ensuring that the Sustainable Development Goals (SDG) are achieved within the 15-year duration before 2030.

Developed in 2012 by the United Nations, these goals are geared toward universal application by taking into consideration the different situations of each country. (READ: What’s next for hunger and poverty after 2015?)

On the top of these goals are ending poverty and hunger “in all forms” by challenging the leaders to coincide their policy-making responsibilities with the problems.

Together with the strategic priorities listed by the ADB and the sustainable goals, ASEAN hopes to finally end hunger. – Rappler.com