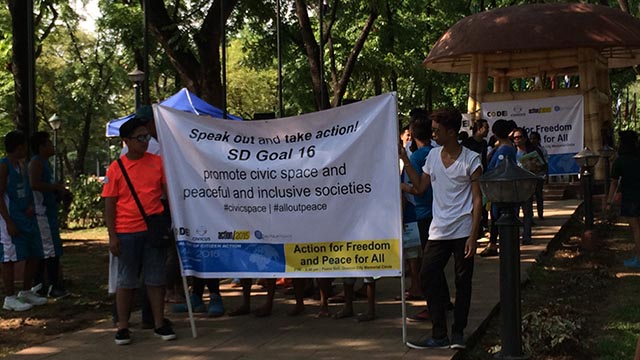 MANILA, Philippines – Various non-governmental organizations (NGOs) appealed to Congress for the immediate passage of the Bangsamoro Basic Law (BBL) as they commemorated the Global Day of Citizen Action (GDCA) on Saturday, May 16.

“The BBL will respond to the needs and aspirations of our brothers and sisters in the Bangsamoro and will lay down the foundation for lasting peace in the country,” Dodo Macaset of CODE-NGO explained.

He added: “It has already been a long 17-year journey. When will we achieve lasting peace and justice in the Bangsamoro if not now?”

CODE-NGO, a coalition of more than 2,000 civil society organizations working towards various advocacies, during the “Action for Freedom and Peace for All” event also highlighted the importance of citizen participation in the advancement of peace in the country.

“Peace is important in itself but it is also vital for equitable and sustainable development,” Macaset added.

Started in 2015, the GDCA raises awareness on the different threats concerning the freedom of expression, association, and assembly. CODE-NGO joins civil society groups in more than 50 countries to promote the proposed sustainable development goals, including inclusiveness and peace.

The Mamasapano clash in January 2015 seemingly “derailed” the passage of the BBL. Government officials who supported the proposed law before suddenly withdrew their support.

But for Paul Paraguya of the All Out Peace movement, people should not lose hope in the peace process. The BBL, he added, offers a way to end the long-term armed conflicts in Muslim Mindanao – not just for the sake of the government forces and Moro groups but also for the civilians.

“Armed conflicts with the revolutionary groups need to be addressed through a democratic peace process,” Paraguya said.

Aside from voicing out their support to the proposed law, supporters also engaged in activities such as the walk for peace, a solidarity dance, and a “peace serenade” from advocate Noel Cabangon.

Bai Rohaniza Sumndad-Usman, executive director of Teach Build Peace, believes that the proposed BBL, aside from bringing peace, will also pave the way for development to finally reach Mindanao.

“Social justice, equal opportunity and human development, that is the essence of Bangsamoro,” she emphasized.

As part of the younger generation of Muslims, she added that they will be the ones who will see the “vital role” of the BBL in giving prosperity that the residents in conflict areas rightfully deserve. 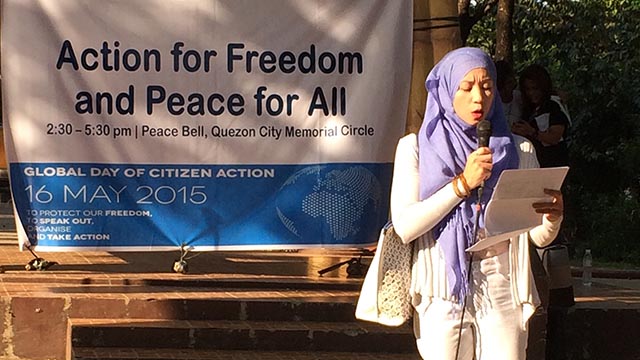 Already in the table of discussion for 17 years, Peace Panel member Paeng David insisted that it is already time for the Congress to finally say “yes” to the said bill. The need for peace and social justice is clear, otherwise the on-going conflict in Mindanao will be inherited by the next generation of Moros.

The passage of the BBL, David added, will render justice to all. (READ: ‘Imperfect Bangsamoro basic law still our best option for peace’)

The groups, however, insisted that the law should be genuine enough to stay true to the aspirations of Moro people, and their right to self determination.

The House of Representatives ad hoc committee is currently on the second day of voting for the proposed ammendments of the BBL.  – Rappler.com

Alain Fusana is a student at the Colegio de San Juan de Letran and a Rappler intern.