Butch Abad in NYC: Mar Roxas at ‘top of my list’ 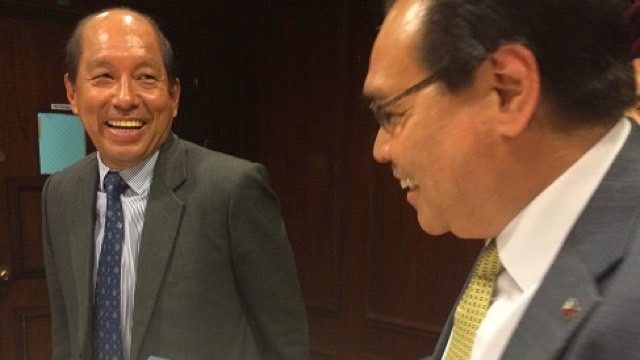 NEW YORK CITY, USA – Who should be the next Philippine president?

The question was posed before former president Fidel V. Ramos on May 21, and tossed again to Budget Secretary Florencio “Butch” Abad 5 days later when both leaders met with the community at a Philippine consulate breakfast forum.

It’s the same question but with a different context.

For Ramos, the question meant who he thought was the most qualified among a motley field of aspirants that included the Philippine vice president, currently under investigation for corruption, and a colorful Mindanao mayor denounced for his alleged links to “death squads.”

For Abad, the question was meant to discern who would be the best individual to continue whatever gains the Aquino administration says it has put in place.

Abad replied by saying he is a party man and as a top-ranking leader of the Liberal Party, his “top of the list would be Mar Roxas.”

But he quickly followed up with, “But 2016 is not a matter of party choice.” He said ultimately it is the voter who will make the decision whether the country will “continue (the gains of the current administration) or go back to the old ways.”

No names were mentioned and it was up to the listener to discern what was left unsaid.

In Manila, Senator Grace Poe, one of the few politicians who have remained unsullied by accusations of dishonesty or corruption, is emerging as a possible contender.

She also ranks high in national surveys. She has not done much to squelch speculations about a possible run for the presidency.

According to a report in Rappler, she recently told reporters that she and Roxas have been talking about their political plans, and how he has “mention(ed) that it is better for us to be together.”

Also in the breakfast forum, Abad talked about the continued killing of Philippine journalists, specifically those who work in cities and regions outside of Manila.

The Committee to Protect Journalists (CPJ) said 9 people have died since Aquino was elected president in 2010. A total of 77 Filipino journalists have died since 1992, CPJ said, blaming the murders on the country’s “culture of impunity.”

Said Abad, “If you look at these cases these are usually journalists holding local warlords and politicians accountable…by exposing jueteng or exposing smuggling.”

He pointed out that these killings are unlike the situation during the Marcos Dictatorship where journalists were murdered to suppress dissent or the exercise of freedom of expression. “They’re totally different.”

He seemed to suggest the national government is helpless against warlords and their private armies that perpetuate many of the killings, but said the government is taking steps to dismantle private armed groups. He mentioned provinces, like Abra and Masbate, which are “notorious for private armies.”

“It’s been a while since you’ve heard of atrocities happening there,” he said.

“While the government has actively been working to dismantle private armed groups, there are still remaining portions of the country where warlordism (exists),” Abad explained. “But more and more, we are beginning to isolate these places.”

He said the cases have been slowing down, but cautioned not to expect them to “fall dramatically,” because the “political culture in many parts of the country is still pretty much patronage and in some cases warlord-dominated.”

Abad also said Aquino has accomplished so much in the last 5 years, putting in place a policy of good governance and structural economic reforms that enabled the country to achieve a 7.2% GDP growth and slow down the rates of poverty and unemployment by 24.9% and 6%, respectively.

“It’s the People Power continuum,” he said, explaining how the “tide has turned” for the Philippines.

“It started when someone was shot in 1983, with the reforms put in place by a succession of leaders, from Cory to Ramos. Somewhere along the line, we got lost, but we reclaimed it in 2010, which is a part of this historical continuum,” he said.

The government’s objective, he continued, is to reduce poverty to a single digit, have a robust middle class, and for Filipinos to be able to find employment within the country that will support their families and give them a decent quality of life. – Rappler.com