On being godless and good: Irreligious Pinoys speak out Facebook Twitter Copy URL
Copied
'God is not necessary to be a good human,' says the Philippine Atheists and Agnostic Society

MANILA, Philippines — Out of 30 countries, the Philippines had the highest percentage of citizens with strong religious beliefs at 83.6%, according to a study conducted between 1991 and 2008 by the University of Chicago.

Despite the Philippines’ reputation as a Catholic country, however, there are more and more Filipinos coming out of the closet — as atheists. The population of the irreligious in the Philippines is around 11 million or 11%, a study by the Dentsu Communication Institute in Japan showed.

The non-religious sector form the world’s third largest group at 16%. This accounts for around 1.1 billion people.

But with more than 80% of Filipinos identifying themselves as Roman Catholics, non-believers are usually perceived negatively. Non-believers are not as welcome in the Philippines, compared to more developed countries.

This is why PATAS or the Philippine Atheists and Agnostic Society, an organization committed to atheism and humanism, was born in 2011.

One of their missions is to encourage atheists and agnostics to come out and speak against this particular discrimination; to seek equal treatment and respect in this country as Filipino citizens.

On May 31, PATASCON2015, the group’s second “irreligious” convention took place to eliminate the circulating myths about irreligious Filipinos. 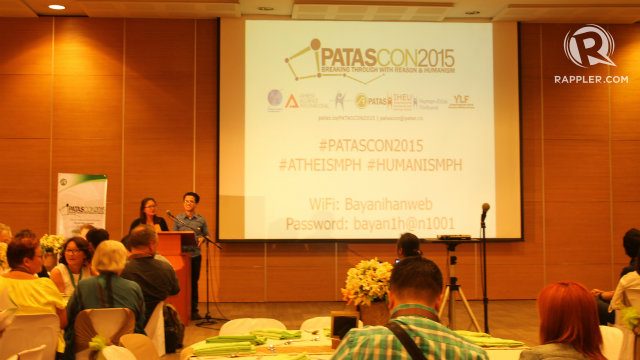 “Think without fear. Live without delusion.”

PATAS is a non-profit, social organization that commits itself to providing social action, stimulating public understanding of atheism and agnosticism in the country. The group also promotes critical thinking, free thought, humanism, and scientific inquiry.

The group aims to act as an agent of social awareness, aiming to break superstitions and replacing them with secular and realistic solutions.

There is a stigma attached to atheists in the country that brings about discrimination, hostility and ostracism, Bill Flavell, a writer from the United Kingdom, said during the convention.

“People here don’t know the term humanism. But if you try to deconstruct the word, people know about it. They don’t have problems about it, except for the part of belief in god,” Termulo told Rappler.

“There are some people who wouldn’t understand why would anyone not believe in a god. Because most of us Filipinos are exposed in that environment that we grew up knowing there’s someone up there,” she added.

Social inequality could still be found in the Philippines despite its largely Catholic population, PATAS observed.

Birth control, marriage, women’s rights, abortion, and reproductive and sexual health were among the topics discussed in the convention.

“Humanism, as compared to understanding atheism, people can understand it better. Because with humanism, we just need to understand that a person has the capacity to do good,” Termulo explained. (READ: We need to talk about religion)

“However, the definition of humanism, being good without necessarily believing in a god, that last part, that is a bit difficult to digest for some people,” she added.

The groups that attended the convention said they are fighting for the inclusion of secular and rational views in the Philippine legal system.

Such views, they argued, should reign instead of religion, as enforced in the 1987 Family Code which favors opposite-sex marriage only.

As for the upcoming 2016 Philippine elections, PATAS would run awareness campaigns and review the backgrounds of candidates.

“That could help people decide properly and rationally, not just based on religion, popularity, or name recall,” said Terumulo. – Rappler.com