From Thailand to Siargao: Why an OFW teacher returned 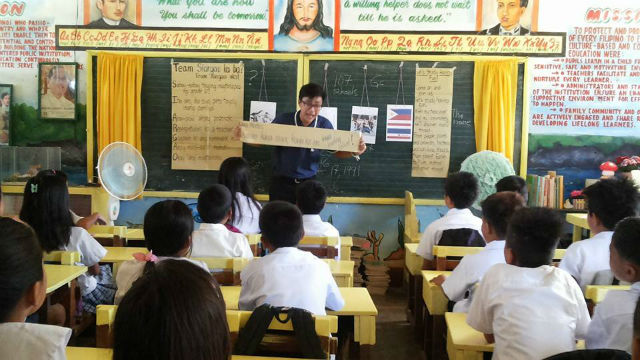 MANILA, Philippines – It’s not easy to leave home to live in another country, but teacher Bryan Mangahas took his chance to teach in Thailand.

After 3 years of teaching in the neighboring country, Mangahas took home what he learned to continue teaching public school in his mother country with Teach for the Philippines.

Teach for the Philippines is a non-profit, non-governmental organization which works to provide all Filipino children with an inclusive, relevant, and excellent education by 2050. It aims to do so by situating the country’s top young leaders as public school teacher fellows for two years.

According to Mangahas, he chose to come back and teach because he shares a similar vision with TFP – to provide all Filipino children with quality education.

“I believe I can make my vision possible, especially [with this] two-year fellowship program,” Mangahas says.

Mangahas, who is originally from Manila, said Thailand is very much like the Philippines – though with key differences in terms of food, language, and places of worship.

The similarities of the two countries made it possible for him to adjust easily to Thai life. It took him only a month to get used to Thai cuisine and 6 months to take command of the local language.

“I never really had a hard time living in Thailand,” Mangahas adds.

Fondly called as “Kru (Teacher) Bryan” by his students, Mangahas originally intended to stay for only a year. But after seeing his impact on HG Sawananan Wittaya School and the Sukhothai community, Mangahas was compelled to extend his tenure.

From Thailand to Siargao

Now a public school teacher in Numencia Elementary School in Del Carmen, Siargao, Surigao del Norte, Mangahas is wary of the challenges that accompany his homecoming.

Mangahas admits he feels pressured with his new assignment, more so because Numencia is a new placement school.

“The pressure is on us [teacher fellows],” Mangahas says.

He also adds that the Philippine educational system has changed since he was last home, moving from the K to 10 system to K to 12, which, he believes, will provide Filipino youth equal access to 13 years of free basic education.

Despite growing up in the Philippines, Mangahas has doubts on his grasp of the Filipino language, which seems to have waned during his 3-year stint in Thailand. To combat this, Mangahas said he constantly practices the local language in front of the mirror and during conversations in the classroom.

But these challenges only seem to motivate Mangahas further.

“I feel more challenged and determined to be the best that I can be,” Mangahas declares.

Ultimately, Mangahas hopes his efforts as a public school teacher will “make a change, make a difference, help the country even in the smallest ways possible.”

While teaching abroad, Mangahas would recall how his grandfather, a former barangay captain, made him promise not to be lured by lucrative offers abroad and make his own contribution to the country.

“No matter what happens, I’d come back and leave my mark just like [my grandfather],” Mangahas says.

Mangahas believes he is delivering on that promise. In a lecture on good citizenship, he challenges his class, “Do you think our country could still become one of the richest countries in the world despite what we’re experiencing now?”

One of his students, Basty, confidently answered, “Yes, by being good and intelligent citizens.”

Mangahas then asks: “What if all the young aspiring leaders in the country teach for the Philippines just like me? Imagine how many Bastys we’ll have, and how many hopes for our future we’ll inspire.” – Rappler.com

Miguel Sevidal is a Rappler intern.