Jul 5, 2015 8:00 PM PHT
Facebook Twitter Copy URL
Copied
'Only then did I realize that these extraordinary groundbreakers didn’t just exist in that room alone, They were everywhere' 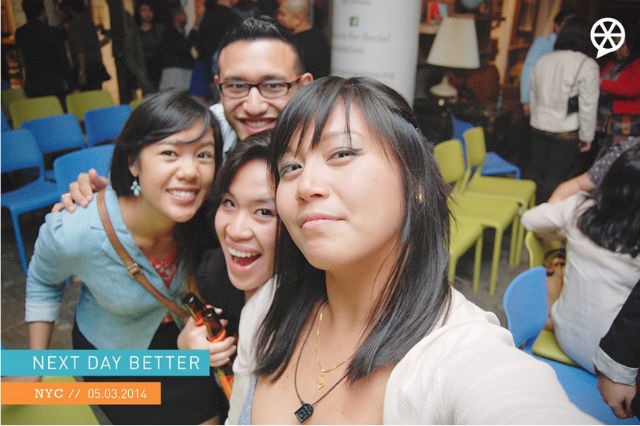 I’m somebody who runs on gut instincts.

The first time I walked into a NextDayBetter event, I knew. These were my people.
Let me paint a picture for you. New York City. The Spring of 2014. The energy was palpable. The room was buzzing with sharply dressed young professionals animatedly chatting next to sharply dressed plates of bite-sized food. The indie electro-pop music was pumping. There were colorful vintage couches everywhere.

Alright, you may be thinking, “so what makes this different from any other trendy speaker series event catering to sprightly creatives, tech enthusiasts, and foodies? Almost everyone in the room was (dare I say it?) a “person of color.” They were people like me.

But what drew all of these fascinating tastemakers of the city all to one spot? What brought us all together? It wasn’t just the coconut sake cocktails or the mouthwatering spread of coffee-flavored bibingka and sisig wrapped in banana leaves catered by masters of culinary Filipino fusion (But let’s be real, that was a huge motivating factor).

The main event was the speakers. Geena Rocero, civil rights activist and founder of GenderProud spoke intimately about her struggle for political recognition of her identity as a transgender woman.

Founder of smash restaurants Maharlika and Jeepney, Nicole Ponseca, voiced the power of owning Filipino food without apology, duck fetuses and all. Matt Grasser and LDLN showed their innovative genius in a live tech demo activating mobile devices to create makeshift Wi-Fi networks in the event of natural disasters like Typhoon Haiyan.

Now, I was homegrown in the suburbs of Northern Virginia. I didn’t grow up with an extensive community of strong, proud Filipino innovators striving to make the world a better place. I didn’t know they existed- anywhere. The hard fact is, stories of Filipino triumphs don’t exactly make “headline news.”

And yet there they were. Real. Right in front of me. Thriving, passionate changemakers trailblazing their own paths in food, technology, and social entrepreneurship

That ambiguous fog that was my future came a little more into focus because I could see people who looked like me- people who were cut out of the same cloth, first-generation, second-generation immigrants and so on descended from the Philippines, who grew up on adobo and rice, who have pushed themselves to the boundaries and survived to tell the tale. Only then did I realize that these extraordinary groundbreakers didn’t just exist in that room alone.

Pumped full of inspiration, I did more digging into what NextDayBetter was all about and I could see that the same spark felt in New York was happening in Los Angeles, in Toronto, in London, in San Francisco. Changemakers from the Philippine diaspora all over the world were lighting up and shouting, “Yes, this is what we’ve been waiting for.”

A space to call our own. A space to tell our stories and connect with like-minded doers and makers. A springboard for taking action. NextDayBetter was spearheading a massive global movement unlike anything ever attempted before.

Sherina Ong is NextDayBetter’s resident wordsmith and community manager. Her writing has been featured in various online publications based in NYC, Toronto, and Manila. NextDayBetter is a content partner of Rappler