Kid who studies on Cebu sidewalk: I want to be a cop or doctor 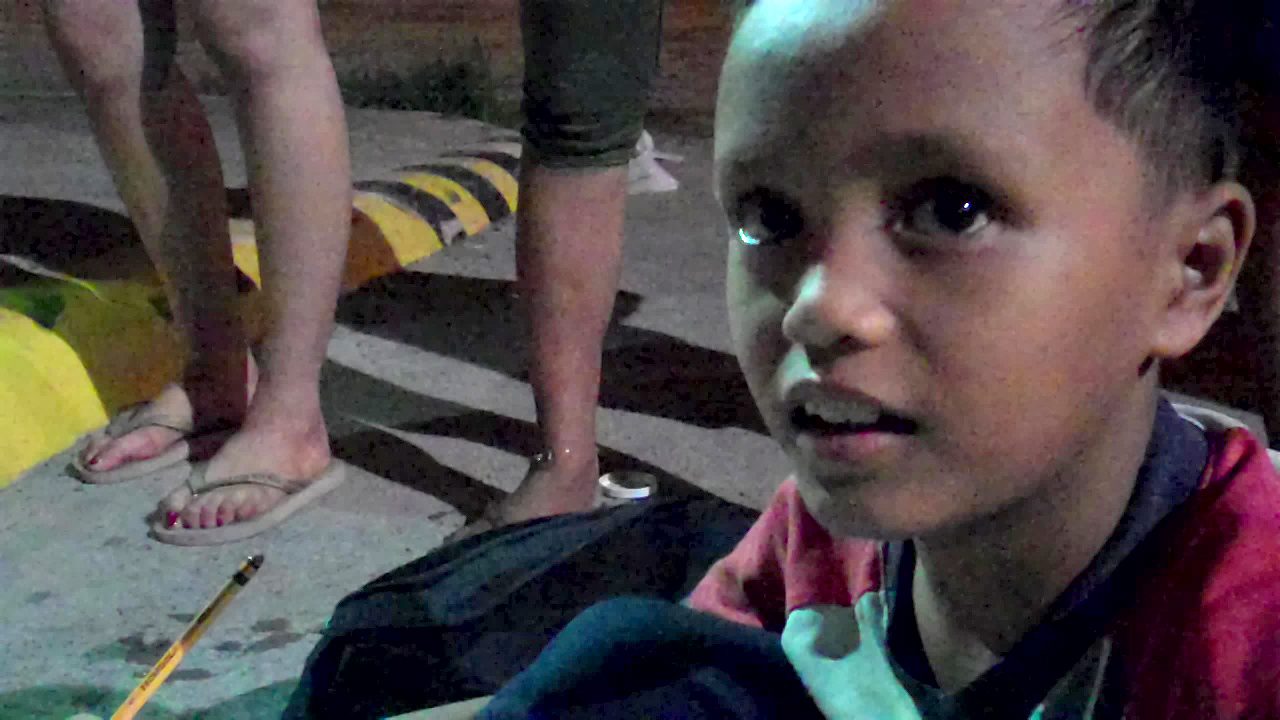 MANDAUE CITY, Philippines – Like any other school night,  9-year-old Daniel Cabrera brought his school bag to the sidewalk of a McDonald’s branch at the Mandaue Reclamation Area.

Daniel sat on a makeshift chair, then put his textbooks and notebook on his “table” – a short wooden bench.  The well-lit area had become his self-designated study room, which he said was far better than doing his schoolwork in the dark at home.

“Sayun raman ang pag-study (The lessons are not that hard),” said Daniel, who was poring over two thick books when Rappler caught up with him on Thursday night, June 25.

While other children his age were playing on the nearby streets, Daniel was busy answering a sequence puzzle given by his teacher as homework.

His favorite study spot is the area near a bright lamp post in the parking lot at the edge of the Mcdonald’s driveway. 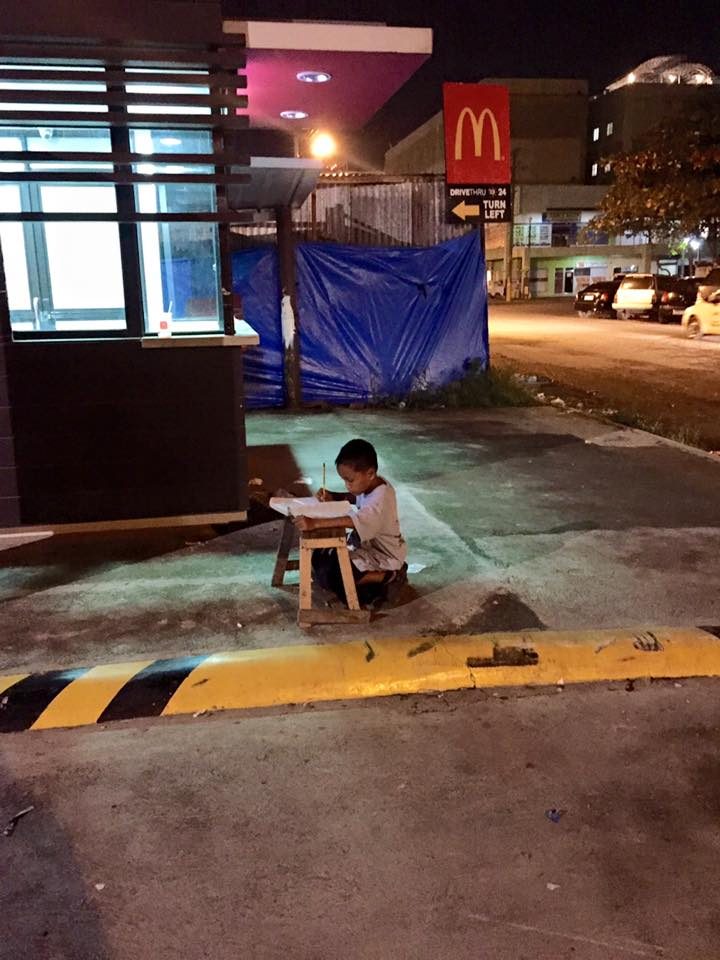 When asked, the Grade 3 student from the Subangdaku Elementary School in Mandaue City said he owned only one pencil. Daniel said his last one was stolen by a fellow student before. This was why he kept a rosary in his school bag.

“It (rosary) is to prevent my only pencil from getting stolen,” Daniel said in Cebuano.

When asked, he said the only school material he lacked was a drawing book.  He’s waiting until  his mother could afford to buy him one.

Daniel walks a kilometer every day from home to school to catch his 8 am class with his younger brother Gabriel, a fellow student. He’s obviously studying hard  hard to achieve either of his two dreams, which he seemed to have thought of only when he was asked about it that Thursday night.

Asked what he wanted to become when he completes his education, Daniel said he didn’t know yet, then paused and thought hard. “I think I want to be a policeman….I also want to be a doctor,” he said in Cebuano.

Daniel, Gabriel, and their mother, Maria Christina Espinosa, stay at the pungko-pungko carinderia (eatery) nearby, where Maria Christina works during the day as a helper. She earns around P60, just enough for the basic needs of her family. The carinderia (eatery) has no walls to protect the family during cold nights, especially when it rains. The family pile up benches to serve as makeshift barriers when they sleep.

When Daniel showed Rappler the pitch-dark stall that doubled as their home,   his younger brother was already asleep on one of the tables, watched over by their mother. The stall was just right beside the concrete perimeter walls of McDonalds.

According to Maria Christina, Daniel got his last name from his father, whom she did not marry. He died from an illness while in jail in Mindanao.

Daniel’s 4 other siblings were also left in Mindanao, under the care of their relatives. Maria Christina said she sometimes did other jobs, such as doing laundry, to earn more money.

She said she was so proud of Daniel when she found out that he was already famous on Facebook.

A photo of Daniel studying outside the fast food restaurant made its rounds on social media after a student posted it on her Facebook page on Tuesday, June 23. (READ: Kid studying on Cebu sidewalk inspires netizens)

Daniel was often seen out of school until Subangdaku barangay captain Ernie Manatad gathered him and 31 other street children and convinced them to continue their studies.

The 32 children were mostly from Mandaue City’s Reclamation Area which has dark alleys prone to crime. The place is also dangerous  because trucks from various industries ply the area.

The barangay initiated a Sunday school to get updates on the children’s studies and their families.

Manatad remembered Daniel when he was still very young, when the boy would be often found playing near empty container vans.

“Isa ni sila sa among gi–enganyo na mo eskwela, ug mupadayun ug eskwela  (He is one of the children that encouraged to go to school),” said Manatad.

Daniel, who rushed to finish his homework while children played in the nearby streets, is proof that his effort is paying off. – Rappler.com

Do you have a similar story you want to share? Send us an email at move.ph@rappler.com. You may also join the MovePH community by signing up here.