Marikina youth learn use of social media for disaster response 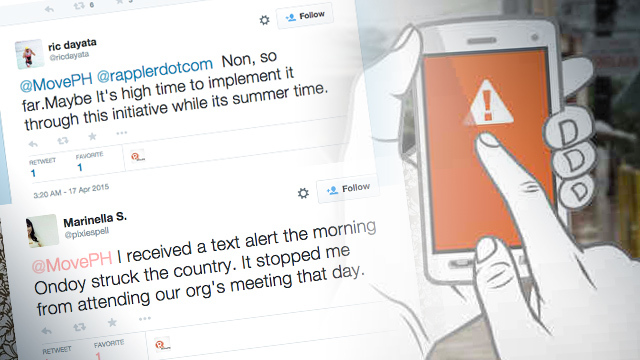 The city’s preparation for disasters does not end with improved equipment and emergency assistance trainings. The use of social media and technology can also help in disaster-preparedness and response.

This is what residents learned during a Rappler social media workshop conducted on Friday, June 26, at the Marikina Legislative Building.

The 73 participants were comprised of students, teachers, volunteers, and local government officials from different barangays in Marikina. During the workshop, they were taught how to use social media tools like Facebook, Twitter, and also the Rappler’s Project Agos online platform.

Marikina was a victim of Tropical Storm Ondoy in 2009, with 246 deaths due to flooding. The Marikina River makes the city a flood-prone area.

Mark Lester Mejia, one of the Marikina City Disaster Risk Reduction and Management Office (MCDRRMO) staff, has learned from his Ondoy experience.

(I cannot forget Ondoy because when we were about to conduct rescue operations, instead of rescuing people, all of us could not go outside because of the flood, and we rescuers wanted to save our family first before we rescue others.)

According to Mejia, local government units are always prepared with their rescue equipment but the residents must also always follow instructions especially when they are ordered to evacuate from flooded areas.

The coordination of the government and the citizens is essential in disaster management because it could save more lives.

During the workshop, the participants received training on how social media can help in information dissemination during disasters.

They learned how to use the Project Agos Alert Map, an online disaster information map wherein netizens may report flood and rescue alerts and other general information.

A simulation on information management was also conducted.

Where's your exact location, Ma'am? So I can send you urgently a fire-team. #AgosTest https://t.co/qbi48uvgjQ

Other members of the group were assigned to use the Agos Alert Map.

Students who participated in the workshop are active on social media.

Mark Anthony Teñoso, student of Pamantasan ng Lungsod ng Marikina (PLMar), said that the use of social media during disasters is not new to him since the youth is very active on Facebook and other social networking sites.

He gets updates usually from the Facebook and Twitter accounts of the Marikina Public Information Office. These updates can also be shared by the youth to their parents who do not have Internet access, he said.

For the final activity, the groups made lists of things to do before, during, and after an earthquake which they also discussed in front of their co-participants.

The MCDRRMO also gave disaster emergency kits after the workshop.

Project Agos has conducted similar workshops in other parts of the country such as Cagayan de Oro and Naga.