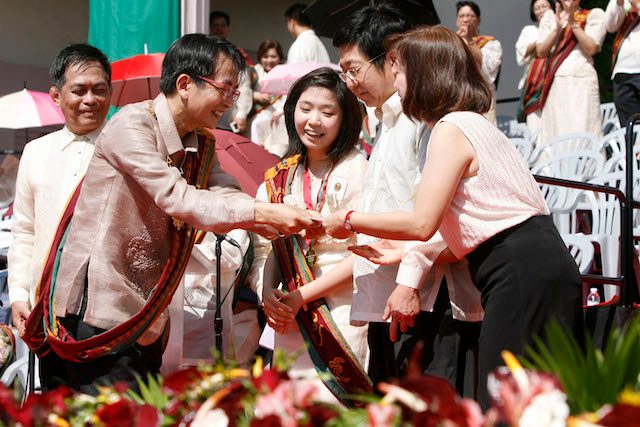 Facebook Twitter Copy URL
Copied
'As we set out into the enigmatic wilderness of life, my wish for you and for our country is that you harness the limitless and evolutionary power towards building a sustainable and fair nation'

MANILA, Philippines – Tiffany Grace Uy, the biology student at the University of the Philippines Diliman (UP) who graduated with a near-perfect weighted average grade (WAG) of 1.004, walked across the stage at the top of her class during the university’s 104th graduation rites on Sunday, June 28. Her grade average is the highest in the university’s history since World War II.

Esteemed guest speaker, Dr Rhodora Azanza, beloved teachers, alumni, parents, and most especially my beloved friends, a blessed morning to you all.

The very first thing I want to say is, “Thank you.”

Not only is speaking to the 2015 class of brilliantly intelligent minds seated before me an immense privilege and honor, but also the nervousness and profuse sweating have given me a natural glow that enables me to shine like the light from the sun despite last night’s sleeplessness from worrying about today.

The celebration of years of hard work, intellect, and pursuit culminating in the graduation of about a hundred students from Biology, each of which are ready to come out of their pupa, spread their wings, and fly.

And believe you me, I had spent many an hour racking my brains, reading books and even researching to look for some sosi anecdote or old philosopher’s tale with which I can relate the journey that has been, and with which I could help fill in the 5 whole minutes I am required to speak with you today.

But perhaps there is no such anecdote or tale that can really illustrate the awesome adventure that has been B.S. Biology.

At least, as best as can the theory of evolution by natural selection of Charles Darwin, which, to take from Theodosius Dobzhansky, nothing in biology would make sense without.

Indeed the theory proposes that phenotypic variation exists among individuals. And I have to say that Biology houses some of the queerest creatures I have perhaps ever met in my life.

This group includes the fiercely academic, amusingly humorous, musically gifted, sports maniacs, politically active, and more – all remarkably talented. And the group of varied individuals in our population has been brutally tested for fitness with the mind-boggling questions from our professors and the complex labyrinthine examinations that really pulled the spirits out of our bodies.

Each enrollment, we have been tested for muscular strength, in running and lining up for our classes. In lab, we have alternatively been tested for strength and heart to be able to dissect and scrutinize the icky blood of a living cockroach without vomiting. Everyday we are tested for the ability to cram copious amounts of information in a couple of minutes before exams. To write 10 to 15 page-long formal reports before its due date at the 59th minute of 11. And, of course, to stay conscious for hours without a single wink of sleep.

To be able to survive we had to adapt. Maybe not in the scientific sense of the concept, since that would necessitate grounds of giving birth to the mutated forms of Limnanthes, some of which were mutated for advanced phenotypes.

But rather, we learned to adapt to the varying conditions of our wilderness by the means of cultural adaptation. We have worked together, cried together, consoled each other, and reveled in joy together. Most notably upon the completion and binding of our thick, freshly scented thesis manuscripts and posted it on Facebook and tagged each other.

At the same time, we have butted heads with each other, inquired into our curiosities, debated the sciences, and challenged each other. In the process, polishing each other into the sparkly diamonds I see today.

Now we have come to this point called graduation.

You, who gathered here today are the few selected. You embody academic excellence and honor. And the capability to make remarkable achievements for our nation.

You have great prospects gearing towards success and likely stability. But the new wilderness we are entering which we like to call “the real world” poses far greater tests of fitness.

The state of our nation is rough. A quarter of our population fall below the poverty line. And this is with the adjusted standards to bolster the ratings of politicians. Several million people in the Philippines are unemployed, making us a country that’s among the lowest in the ASEAN. Deep inequities exist between access to public resources that leave many of our brethren to succumb to illness and die without ever having received healthcare.

Moreover, our political situation is highly volatile. And despite all the high marks, achievements, and accomplishments under our belt, we come to the stark realization that there are many things that school has not prepared us for.

The problems our country faces are real and extensive. And several generations of ambitious individuals have gone before us and yet the problems still persist.

How do we even begin to solve the problems of our nation? Is it even possible?

Here, perhaps we can glean some wisdom from our biology which has never ceased to amaze me.

It’s the limitless of human potential that we’ve served in the evolution of life.

This is evidenced by the record-breaking feats of humanity, the complex institutional systems we have crafted, the groundbreaking technological innovations we developed, enabling our relatively young species to be changing the face of a multi-billion year old universe.

And we cannot even fully understand the mystery, complexity, and awesomeness of the human life. I believe that there is limitless potential in each and every brilliant mind seated before me.

Your minds, when inspired by imaginations unbound by glass ceilings. When inflamed with courage to tackle real societal problems, and when grounded and motivated by an inherent love for our country and our people can make the crafting of the sustainable and stable future for our nation, not just possible but rather inevitable.

Beloved friends, as we set out into the enigmatic wilderness of life, my wish for you and for our country is that you harness the limitless and evolutionary power towards building a sustainable and fair nation. After all, a life motivated by service is the most meaningful.

So, may you keep learning, keep believing, and keep evolving.

Congratulations to the graduates of 2015! Thank you and a wonderful morning to all. – Rappler.com