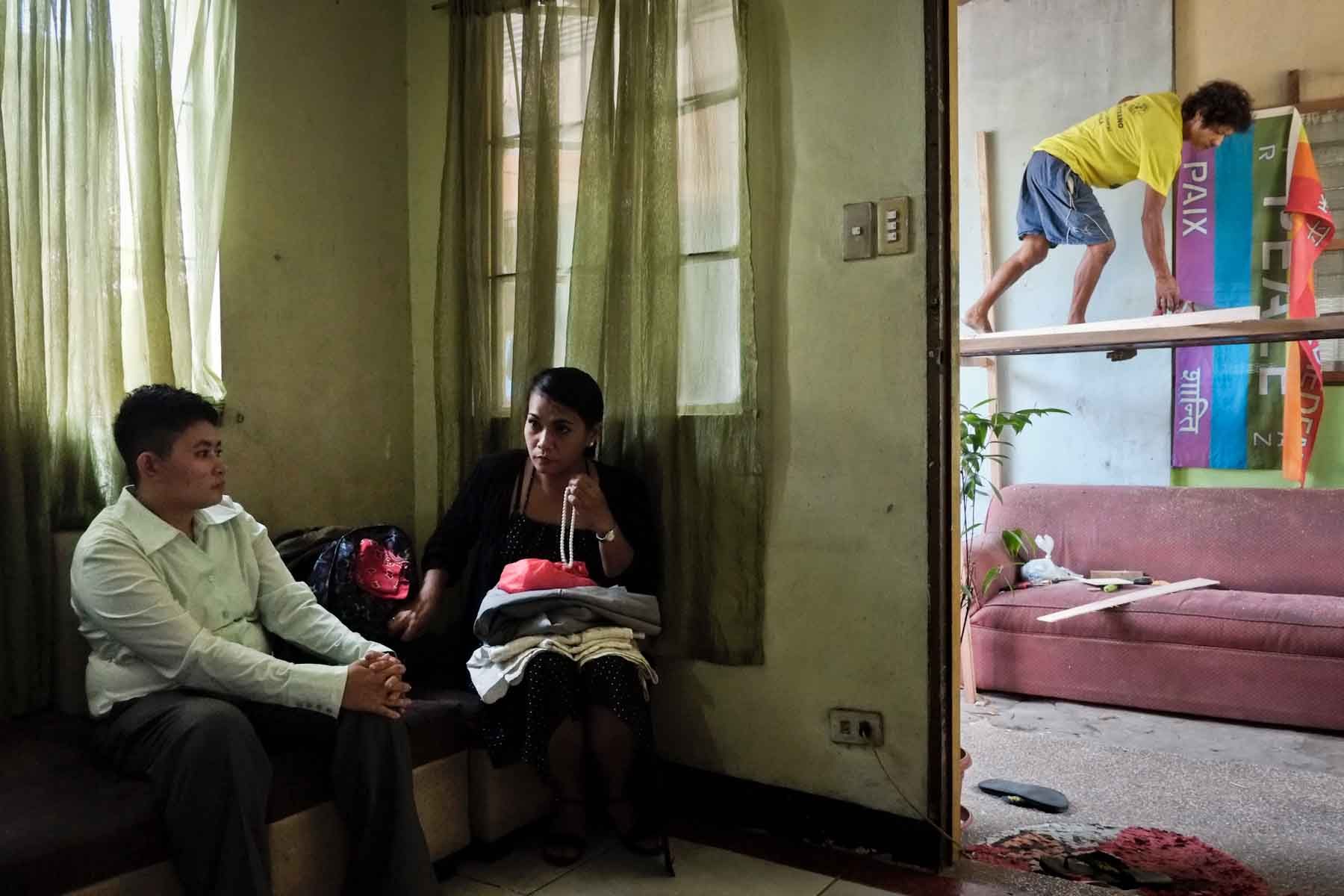 Facebook Twitter Copy URL
Copied
“We are not demanding for special rights. We’re demanding for our inherent right. It is our right to get married to the one we love, whether that person is heterosexual or LGBT.”

MANILA, Philippines — The members of the LGBTS Christian Church were busy setting up the covered court for the 15 couples who were to be married in a mass wedding ceremony in the village of Sangandaan (crossroads) in Quezon City.

While plastic chairs were being dressed with satin cloth, a woman was arranging the flowers, a transgender woman was hanging a painting of what looked like Jesus with a man kneeled next to him, and a gay man was fixing the wooden cross on the altar table. The colors of the rainbow lit up the whole set up.

Meanwhile, a few blocks away, at the house of Rev. Crescencio “Ceejay” Agbayani Jr., some of the couples were busy with their own wedding preparations.

The minister himself was getting ready for the fourth, same-sex, mass wedding he was going to administer. He was spraying what looked like repackaged, fabric freshener on his vestment. Rev. Ceejay, the founding pastor of the LGBTS Christian Church Inc., said he created his ministry to provide a safe place of worship for lesbians, gays, bisexuals, and transgenders (LGBT). Secondary to that is to fight for marriage equality.

During the homily of the Rite of Holy Union, Rev. Ceejay will be quoted as saying, “We are not demanding for special rights. We’re demanding for our inherent right. It is our right to get married to the one we love, whether that person is heterosexual or LGBT.”

Jennifer Corciga, a 34-year-old nurse, came from a failed marriage. While working abroad, she discovered her philandering husband’s extra-marital affairs. She immediately sought an annulment.

Nursing a broken heart, she thought she found love once again with a lesbian lover. It was again a long-distance relationship. And again, she discovered she was being cheated on by her partner. Again, that relationship ended. Now, she’s at Rev. Ceejay’s house, getting dressed for her second wedding, and she’s marrying her second lesbian partner, 26-year-old Manilyn Carillo, who prefers to be called Glen.

Glen identifies himself as a “butch”. He even works as a safety officer in a construction firm.

Getting married to Jennifer is Glen’s way of solidifying his promise of true love and fidelity. Incidentally, their marriage comes at the eve of their first anniversary as a couple.

Between transman and woman

As early as their first year together, Julie “JM” Morta already wanted to marry Verlyn Castillo. But it took another 5 years before they finally tied the knot. (We long wanted to have this union. When Rev. Ceejay offered the mass wedding, we grabbed the opportunity. We can’t get married in an ordinary wedding because the LGBT issue is rather sensitive.)

JM is a transman on his second month of hormone therapy. His voice seems to have deepened, sounding more baritone. He’s fixing the jacket of his suit, looking every inch the groom, while Verlyn is having her make up done at Rev. Ceejay’s kitchen. Their two-year-old son Julian is dressed in a white, long-sleeved shirt and vest, interacting with other LGBT couples in the minister’s house.

After a long time waiting, JM and Verlyn are finally blessed in a Holy Union of the LGBTS Christian Church.

Verlyn said, she found JM to be more of a man than other men. More than that, she found true love in her transman. Irene Santacruz (not her real name) is a young bride at 22. She’s always been a lesbian she says. She’s always been sure about her sexuality since she was 13. She also says she’s sure that she is making the right decision in getting married at a young age.

The spritely Cebuana claims she knows what real love is, having been through five relationships, or “long-term relationships” as she calls them, since she was 14.

While Irene gamely answered questions about their relationship, her partner, Emma Andres (not her real name), remained aloof. Emma altogether avoided the lenses of photographers covering the mass wedding.

Later, Irene and Emma requested that no identifiable pictures be published and their real names withheld. But they still agreed to make their love story public. Irene explained that Emma’s family is “conservative” and they are afraid she may be ostracized.

Their fears are valid. It’s just ironic that they are still in hiding, especially since their union is now blessed by a Christian church that offers a haven for the LGBT community, a church that is also fighting for marriage equality. – Rappler.com