On preventing HIV/AIDS: Are you afraid of condoms?

Jul 8, 2015 3:01 PM PHT
Fritzie Rodriguez
Facebook Twitter Copy URL
Copied
Low condom use continues despite the many efforts of advocates to raise awareness on HIV/AIDS and the scientific studies proving the role of condoms in HIV prevention 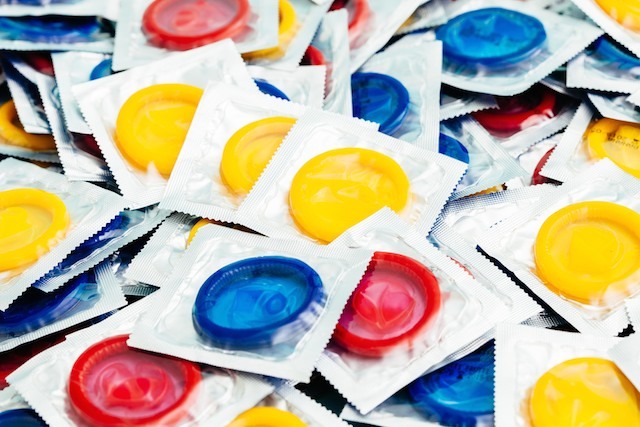 Apparently, many Filipinos do not.

New HIV cases in the Philippines have grown by as much as 1,038% in as little time as 6 years, the Department of Health (DOH) reported in June 2015. At present, 21 Filipinos are reported to be infected with HIV daily.

Yet condom use among Filipinos has only increased by a mere 2% in two years.

Low condom use continues despite the many efforts of advocates to raise awareness on HIV/AIDS and the scientific studies proving the role of condoms in HIV prevention.

“Condoms, when used correctly and consistently, are highly effective in preventing HIV and other sexually transmitted infections,” the World Health Organization (WHO) stressed.

As of 2013, however, over 13% of Filipinos were unaware that “using condoms reduces the risk of HIV.” Although HIV awareness is generally quite high, many other Filipinos remain in the dark, the DOH found.

For example, over 40% of Filipinos still believe in the following myths:

Some Filipinos are also unaware that HIV can be prevented, that “healthy-looking persons” can have HIV, that having only “one faithful uninfected partner” reduces risk of HIV, and that sharing needles can increase one’s risk.

Meanwhile, others think that HIV/AIDS can only be acquired by gay men, dismissing the different ways on how it can be transmitted. This misconception roots back to the 1980s when AIDS was still labeled as “gay cancer.”

Such misinformation helps in the spread not only of the disease, but also of stigma.

“HIV is our problem,” said Ina Pangan, Assistant HIV Surveillance Officer of the DOH Epidemiology Bureau. “Providing correct information and linking the key affected population to the HIV services we offer is our responsibility,” she continued.

The most cited reason for not using condoms, the DOH found, is that supplies are simply “not available.” Meanwhile, other Filipinos say they “don’t like condoms” or think that condoms are “not necessary.”

To influence condom use, the DOH advises communities to make condoms more available, and for healthcare workers to make HIV/AIDS education more “understandable and personal,” including instructions on how to use condoms consistently.

Aside from learning about reproductive health and safe sex, the DOH also encourages individuals to get tested. Some Filipinos, however, have no idea that there are health centers and non-governmental organizations (NGOs) offering free condoms, HIV testing, counselling and treatment.

Some may also delay testing due to shame.

From 2011 to 2013, HIV testing increased but remained low, the DOH revelead. The percentage of Filipinos who never got tested remain virtually unchanged at 82.81%.

In the past decade, HIV cases in the Philippines have been increasing at the fastest rate among the young. They also have the least knowledge and access to HIV testing. (READ: What you need to know about children with HIV/AIDS)

“Even before their first sexual encounter, they should already know about condoms and how to use it,” Pangan suggested.

Meanwhile, the percentage of Filipinos with “comprehensive knowledge” of HIV/AIDS is still low though increasing with education, the 2013 Young Adult Fertility and Fertility Study (YAFFS) found.

“We are providing HIV testing,” Pangan stressed, “But people should know about this. Maybe there’s a lack of advertising or marketing.”

Half of Filipinos get their HIV information from the television, the DOH found. This is followed by inputs from friends and family – who may or may not be reliable sources.

Other major information sources include the Internet, peer educators, health centers, and NGOs.

According to the WHO, the Philippines has the world’s fastest growing HIV epidemic. Advocates, however, say the battle against HIV/AIDS is not impossible. Information, they say, remains the greatest weapon. – Rappler.com