UP fratman, jailed for 6 years, returns to fix prison system 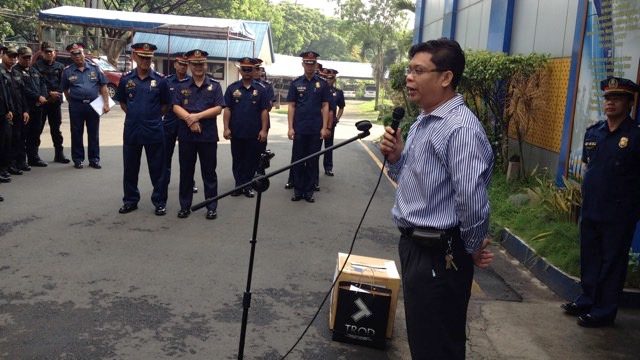 Facebook Twitter Copy URL
Copied
Raymund Narag never let his prison cell define who he was and the circumstances he found himself in. This is his story.

MANILA, Philippines – When Raymund Narag finished his degree in public administration at the University of the Philippines-Diliman in 1995, he watched his batchmates march from a distance, hidden behind trees. Served with a warrant of arrest three days prior to the ceremony, he could not join his friends to accept his diploma.

Narag, who was then a member of the Scintilla Juris fraternity, was allegedly involved in a brawl with members of the Sigma Rho, a rival fraternity, which led to the death of Dennis Venturina, a member of Sigma Rho.

Along with 10 other frat men, he was charged with murder, two counts of frustrated murder, and three counts of attempted murder. Narag would spend the next six years, nine months, and four days in the small confines of the Quezon City Jail.

He spent his first year in the Jail avoiding other inmates. He had heard of the violence of gangs inside and took to his cell, where around 180 other inmates lived in a space built for 20.

On top of that, his case was a frustrating and difficult one, as his trial hearings were delayed several times through the course of his detention. After his petition for bail was rejected twice, he decided he needed to change his perspective and make something out of nothing.

“Hindi pwedeng magmukmok ako palagi,” Narag said in a phone interview. (I could not just mope around all the time.)

His life changed when a fellow inmate approached him to ask for a favor: “Kuya Raymund, gaw’an mo naman ako ng sulat.” (Kuya Raymund, help me write a letter.) The inmate, Narag recalled, wanted to send a letter to his family who had not visited in three months. Like many other inmates, he did not know how to read or write.

In a letter written on a silver cigarette box wrapper, Narag “made sure that [the inmate] asked for forgiveness, even though he did not tell me to write that down.” He sent the letter with the help of his sisters who would visit him every week.

Not long after, the inmate’s parents came to visit.

The inmate must have told others that Narag was a man of letters, as many went up to him to ask for the same favor. Slowly, he became known as ‘Kuya Raymund.’

Fellow inmates started opening up to him. It struck Narag how little they knew about their cases.

“I felt obligated to study criminal procedures and the rights of the accused,” Narag said.

Borrowing books from friends who were taking up law and related disciplines, he studied criminal justice to help inmates know more about their individual cases. Eventually, he asked the warden for formal hours to give inmates an orientation of their legal rights.

So, on Thursdays, from nine to ten in the morning, in a cell that was also their chapel, inmates would muster around Kuya Raymundand ask him about their legal remedies, if any. With UP Pahinungód, a volunteer service program of the University of the Philippines, Narag helped inmates get information on the status of their cases and schedules of their hearings, as well as get paralegal advice with the help of law students and volunteers.

Gradually, Narag made his way up the rungs of the jail hierarchy, ultimately being named the mayor de mayores or the head of all cell leaders inside the jail.

As head mayor, he helped the warden manage over 3,000 fellow inmates. He organized the Peace and Order Council, through which he conducted leadership training and management seminars for future jail mayors, and the Functional Literacy Class Program, an alternative primary and secondary education program.

Narag derived strength from the people he met inside. He talked of the manicurist Susan, detained for merely getting caught in the middle of a drug raid, who told him, “Hindi ang kulungang ito ang magkapagpapasira sa kalooban ko.” (This jail is not going to ruin who I am.)

Like in any jail, there were gang conflicts and hostile inmates, but with his newfound faith, he lived a relatively quiet life in jail.

“I was an atheist in UP,” Narag admitted. In jail, he realized he had only been confused. Every week, Christ’s Youth in Action (CYA) – a faith-based organization – would visit him in jail. With CYA he eventually established Kristo Okay Sa Amin (KOSA), a bible-study and prayer program, which became a “mechanism for peace in the prison.” Narag was acquitted and released in 2002. The court found him to be wrongly accused. His fellow fraternity brothers, however, were convicted and sent to Bilibid Prison.  (READ: Why anomalies happen in Bilibid)

Prison never quenched his thirst for knowledge. Narag continued his studies, eventually receiving his UP diploma, and went on to do his PhD in the United States. He is an assistant professor at the Southern Illinois University and a visiting professor at the UP National College of Public Administration and Government. (READ: Raymund Narag’s graduation speech)

Unlike many former detainees who leave the jail vowing never to return, Narag keeps returning to the city jail and other prisons to study how the system can be reformed.

He also wrote Freedom and Death Inside the Jail, a book that details the problems of one of the country’s regional jails. He joked that you could smell the stench of Quezon City Jail and even taste its food due to the vividness of his descriptions.

Now, Narag is using the knowledge he gained first-hand to improve the country’s penal system. Aside from writing countless papers on jail and prison conditions in the Philippines, Narag is presently teaching the principles of effective criminal management to officers of the Bureau of Jail Management and Penology (BJMP) and the Bureau of Corrections (BuCor). He gives these lectures for free but is looking for additional funding to help him expand his lecture program.

“Going to jail was a very spiritual [experience] for me,” Narag said. “At first, I was scared [but learned that jail] was a social laboratory that one needed to study to understand,” he added.

It is Narag’s belief that, ultimately, inmates have dignity, too. What’s lacking is the environment that will allow them to better themselves and return to the folds of society as reformed individuals. Rehabilitation proceeds from empowerment, Narag believes.

If you want to support the reforms and lecture program of Raymund Narag, he can be reached via e-mail: rnarag@siu.edu.

Janelle Paris is a Rappler intern.