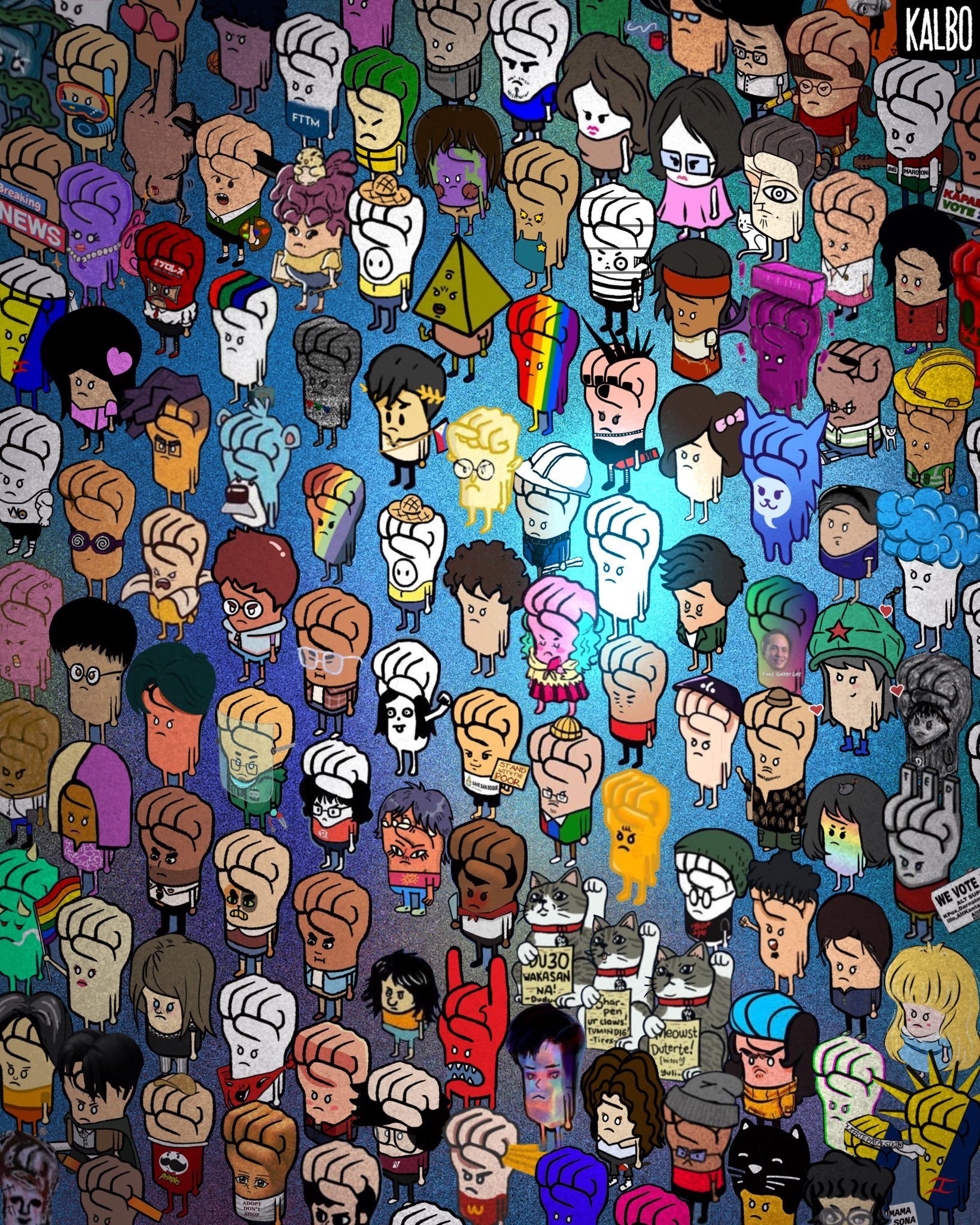 Facebook Twitter Copy URL
Copied
The artist behind Tarantadong Kalbo calls on Filipinos to speak out and stand up, ‘even if it feels like you’re the only one doing it’

What started out as a simple image has inspired Filipino artists across the nation to stand up for what they believe in.

Satirical cartoonist Tarantadong Kalbo posted a digital drawing on Saturday, July 17, of “fist people” bowing down to seemingly resemble the fist bump gesture used by President Rodrigo Duterte and his allies. The focus of the drawing is on the one fist person, reminiscent of the raised fist used by activists everywhere, who dared to stand up and stand out from the crowd.

Several artists have since joined in and added their own fist people to the drawing, slowly populating the artwork with more “dissenters.”

Kevin Eric Raymundo, the artist behind Tarantadong Kalbo, said he didn’t expect anyone to answer his call to action.

“At that time kasi, ang daming lumalabas na bad news…. And then as a satire artist, the deluge of trolls on my page…napapagod na ako.”

(At that time, there was a lot of bad news going around…. And then as a satire artist, I got tired by the deluge of trolls on my page.)

“But at the same time I also felt that I have this responsibility as an artist with a huge following to use my platform for good,” he added.

Three days after he posted his artwork, Raymundo tweeted about the overwhelming support he has received from fellow artists. He started retweeting artists who posted their own versions of the drawing, and he later compiled several entries all in one image.

But before his artwork went viral, Raymundo actually shared that his frustration with the local art community was one of the triggers that prompted him to draw the image.

(There’s a disconnect between the art [of the local art community] and what’s happening in the country. I guess I wanted to jolt people as if to tell them, “Let’s get involved with what’s happening.”)

Expressing one’s political stance through art is not new to Filipinos. Under the Duterte administration, Filipino artists have posted political art during Independence Day and before previous State of the Nation Addresses. Artists have also previously denounced the anti-terror law and police killings through their works.

Raymundo hoped the artwork inspired Filipinos to gather the strength and courage to take a stand, even if it means starting small.

“I guess the message is to not be afraid of speaking out, of standing up for what is right, even if it feels like you’re the only one doing it. All it takes [is] one drop to start a ripple,” he said.

Artists can post versions of Raymundo’s artwork featuring their own fist drawings using the hashtag #Tumindig.