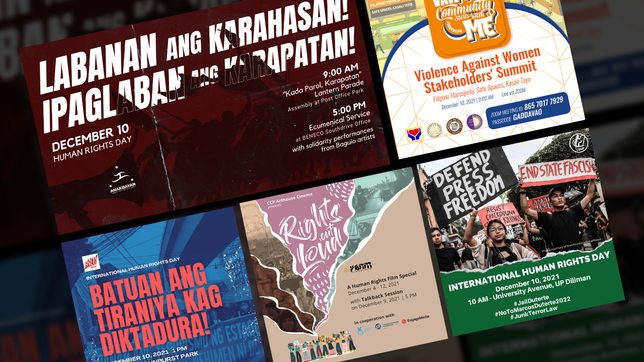 Facebook Twitter Copy URL
Copied
In celebration of International Human Rights Day, civil society groups in the country are preparing for activities and protests where Filipinos can express their support for human rights

MANILA, Philippines – The Philippines has witnessed a string of human rights abuses in the time of Duterte – from the war on drugs, attacks against critics and even the media, to the mismanaged pandemic response.

It was also during Duterte’s time when the feared anti-terror law was passed and implemented. Days before the celebration of human rights day this year, the Supreme Court voided anti-terror law’s Section 4, which would have made dissent or protest a crime if it had an intent to cause harm. The decision of the Supreme Court has garnered mixed reactions from lawmakers and other civic groups.

It is within this backdrop that the Philippines would be celebrating the 73rd International Human Rights Day on Friday, December 10. The theme for 2021 is inspired by the Universal Declaration of Human Rights’ first article:  that all human beings are born free and equal in dignity and rights.

Below is a list collated by Rappler of activities and protests organized by different groups to mark the International Human Rights Day:

On December 10, 8:30 am,  Human Rights Defenders and Rise Up Families will lead a human chain in front of the Quezon City Hall to collectively express their dissent towards the killings of innocent Filipinos due to Duterte’s drug war.

By 10 am, a united mobilization for the International Day of Human Rights will take place at the University Avenue, University of the Philippines Diliman to assert for the safe reopening of schools, academic freedom, press freedom, and human rights, among others

In joining the protest, proper health protocols must be still be followed such as wearing masks and practicing social distancing.

On December 10, at 9 am, a mobilization entitled “Power to the people; Resist tyranny! Defend democracy” will take place at Post Office Park, led by Anakbayan Metro-Baguio.

At 1 pm, BAYAN – Panay will lead a mobilization at Iloilo Sunburst Park to express their dissent towards red-tagging and community attacks, as well as commemorating the victims of the war on drugs.

University of the Philippines Diliman

The Office of Vice-Chancellor for Academic Affairs of UP Diliman will hold a virtual open mic event in celebration of International Human Rights Day on December 10, at 7 pm via Facebook Live.

The Cultural Center of the Philippines Arthouse Cinema is currently holding a special human rights film screening featuring films that highlight human rights stories in the Asia Pacific with focus on digital rights, women leading protests, commuter mobility, and indigenous peoples. The film screening will be from December 4 to 12.

Visit this Vimeo page to join the screening.

On December 10, at 7 pm, FEU Department of Communication’s Likhang Mulat Film Movements Festival 2021 will have its premiere night. Likhang Mulat serves as a platform that showcases critical and social advocacy media produced by the FEU Communication students.

You may register for the film screening here.

On December 11, at 5 pm Manila Time, Filipino LGBT Europe is set to conduct Filipino Queer Forum: Creating a Safer and Inclusive Philippines. The panelists of this forum include:

Visit their event page for more information about the forum.

In conjunction with International Human Rights Day, the Department of Tourism – Davao Region is set to conduct its Violence Against Women Stakeholders’ Summit on December 10 at 9 am. The summit will take place via Zoom.

Masipag launched an anthology of poems written by its farmers ahead of International Human Rights Day. This anthology focused on the problem of Rice Tarrification Law, agriculture, pandemic, shrinking democratic spaces, among others.