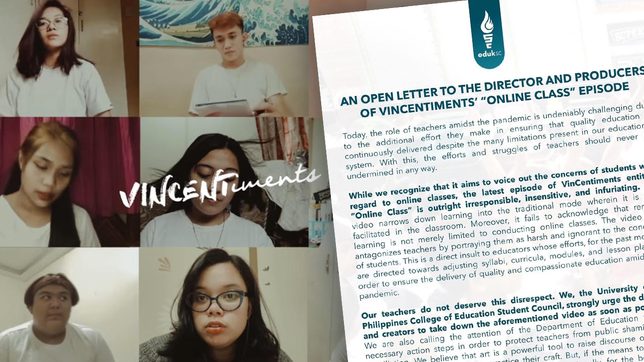 Facebook Twitter Copy URL
Copied
'This is a direct insult to educators.... The efforts and struggles of teachers should never be undermined in any way,' says the UP College of Education Student Council

“Our teachers do not deserve this disrespect.”

The University of the Philippines (UP) College of Education Student Council came to the defense of teachers as it denounced a controversial short film depicting a student’s perspective on online classes.

The almost 10-minute short film follows a student undergoing an online class who’s met with distractions at home while delivering a report.

Frustrated by the teacher’s prodding to finish the report, the student launches into a rant that tackles high tuition despite the shift to online education and how homes are not conducive to learning.

The student also criticizes teachers’ methods during online classes, saying that teachers are insensitive to their struggles and students find it hard to adequately participate. The student adds that “online class is not equals to online learning.”

Released on Friday, August 7, the short film is the last episode in a trilogy titled Online Class that features the perspectives of those affected by online learning. The first two episodes had touched on the views of parents and teachers on online learning.

These videos were posted by VinCentiments, the official account of independent theater group SaWakas.

While the UP College of Education Student Council acknowledged the latest video’s aim to voice out concerns of students regarding online classes, it criticized the short film for being “outright irresponsible, insensitive, and infuriating.”

It added how the short film “narrowed down” learning to the traditional mode set in classrooms, refusing to acknowledge how remote learning “is not merely limited to conducting online classes.”

The student council also slammed how the short film ended up “antagonizing” teachers by portraying them as “harsh and ignorant to the concerns of students.”

“This is a direct insult to educators whose efforts, for the past months, are directed towards adjusting syllabi, curricula, modules, and lesson plans in order to ensure the delivery of quality and compassionate education during the pandemic,” the student council said.

“The role of educators amidst the pandemic is undeniably challenging due to the additional effort they make in ensuring that quality education is continuously delivered despite the many limitations present in our educational system. With this, the efforts and struggles of teachers should never be undermined in any way.”

The UP College of Education Student Council urged the creators of the short film to take down the video.

“We believe that art is a powerful tool to raise discourse…. But, if the means to an end harms marginalized sectors, intentionally or unintentionally, for the benefit of advancing art, we condemn this form of expression as this places the marginalized [in] a situation that further tarnishes their dignity,” the student council said.

It also called on the Department of Education to protect teachers from public shaming and humiliation.

The student council pointed out how efforts must be directed towards strengthening the fight for quality, accessible, and relevant education, instead of “putting all the blame towards our teachers.”

Sharing the controversial video a day after it was posted, VinCentiments responded to the massive backlash by standing by their work.

By Sunday, August 9, Darryl Yap, the writer of the short film, released an official statement thanking teachers who understood that the film was not an “attack” but an “opportunity” to air their side.

Yap also acknowledged how the film may be offensive to others.

(Nobody said this content is not offensive; yes, this has hurtful jokes and words because that’s the true reaction of many people who are valued by VinCentiments.)

He stressed how the short films “opened the floodgates” for people to fight for those affected, directly or indirectly, and provided a way for an issue to be discussed further.

(You learned each other’s attitudes – how they face real instances, and how your classmates, friends, and teachers react.)

Yap said VinCentiments doesn’t just stand by parents, students, and teachers, but for the “truth.” – Rappler.com