MANILA, Philippines – On Thursday morning, July 23, members of the media converged in front of a property owned by the Iglesia ni Cristo (INC) in Quezon City following a series of handwritten messages flashed from a window of a house overlooking the street.

Media reported the messages on plain white paper that read, “Tulong! Hostage kami! (Help! We’re being held hostage!)” and “Where are the missing ministers?” This prompted concerned INC members to rush to the scene. (READ: Sign outside INC building: ‘Tulong. Hostage kami’)

One of them was 36-year-old Romelo Nuñez. “We rushed to Tandang Sora because we saw reports online that our brothers and sisters are in danger,” he said.

Nuñez and his wife were intrigued by the developments in their church. “I don’t think the INC officials will make an action like this, abducting their own brothers and sisters? For what? This doesn’t make sense.”

Nuñez believed that this “drama” is personal to members of the Manalo family, and not an INC organizational problem. He also believed Angel and Tenny Manalo, brother and mother of INC Executive Minister Eduardo Manalo, are just dragging the organization to oust the current INC leadership. (READ: Iglesia ni Cristo’s Manalos say ‘lives in danger)

Angel Manalo finally emerged from the gate of the INC property at around 12:30 am to 1 am on Friday, July 24. He spoke with Police Superintendent  Ariel Capucao, Station 3 commander;  and Quezon City Police District director Chief Superintendent Joel Pagdilao.

Responding to questions, Manalo categorically said they were not being held hostage. He said they made the call for help on Youtube to protect themselves from elements who want to harm their family. This was why they remained inside the INC property.

Asked about messages flashed outside the window earlier that day, Manalo said he didn’t write them, and it was a “kid’s joke.” (READ: Cops rule out abduction in Iglesia compound)

Remilyn, an INC member who joined media to listen to Manalo’s midnight clarification, said she was “disappointed” with what she just heard. She went to Tandang Sora to support Angel and Tenny Manalo after seeing the viral Youtube video and reading Rappler’s report.

“I was carefully listening to him….I was very disappointed to hear that the ‘hostage’ thing was not true. Where did it come from?” said Remilyn, who refused to give her full name. 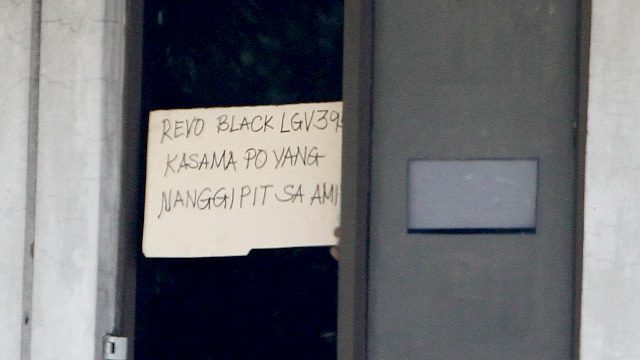 She added: “It was insane! Could a kid do that? One of the messages even detailed a car’s plate number, warned people and asked, ‘Where are the missing ministers?’ And if it is joke, it was not a good one.”

Like the Nuñez couple, Remilyn rushed to Tandang Sora because they were concerned about the safety of the Manalos, only to find out that the messages were made by a prankster.

“I left my child at home with her lola (grandmother) just to come here and support them. I even cried when I saw the video on Youtube and the pictures of the messages posted [outside] the window, only to hear Angel Manalo say that it was never true,” Remilyn said.

“I think they deliberately made it up just to attract attention from the public and the media. It was a very irresponsible act. Many of our brethren were worried about their safety and situation. I felt being used in propaganda against their own family member,” she added.

Nuñez and Remilyn told Rappler they believed what they had just witnessed, which they called the “Tandang Sora Drama,” was an act to gain media mileage, and sympathy from both INC and non-INC members.

“It is sad to see the Manalo family like this, but it is also sad that they are dragging the Iglesia for their own vested interest. Now, it is clear to me, it was just a joke that was never funny at all,” Remilyn said. – Rappler.com