Jul 24, 2015 2:10 PM PHT
Katerina Francisco
Facebook Twitter Copy URL
Copied
(UPDATED) The Department of Justice, however, says it will avoid issues internal to the Iglesia ni Cristo, a group known for its influence in government 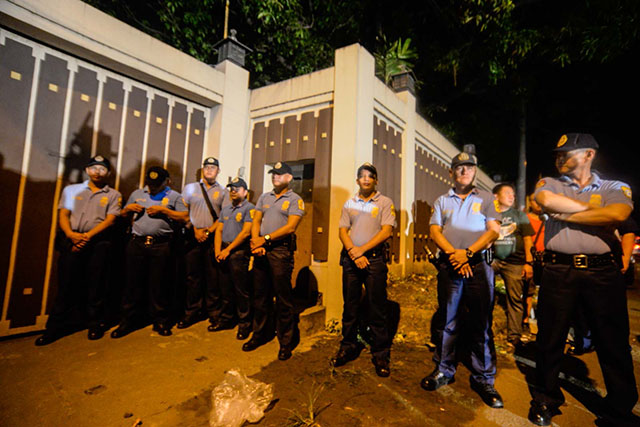 MANILA, Philippines (2nd UPDATE) – The Department of Justice (DOJ) on Friday, July 24, said it has ordered the National Bureau of Investigation (NBI) to probe the alleged abduction of Iglesia ni Cristo (INC) ministers.

The DOJ, however, said it will avoid issues internal to the INC, a group known for its influence in government. (READ: INC: From rag-tag sect to influential wheeler-dealer?)

Several NBI agents arrived at the INC compound Friday afternoon, but were unable to enter despite repeated attempts.

NBI investigator Job Gayas said the group intends to conduct an exploratory probe to check allegations of illegal detention within the compound.

In Malacañang, Palace Communications Secretary Herminio Coloma Jr said while the INC case is apparently internal to the organization, police authorities have been sent to the area to protect peace and order, and the “safety of all concerned.”

“Reports about events that have transpired involving INC officials indicate an apparent internal organizational dispute. Be that as it may, the PNP’s Quezon City police district office and Anti-Kidnapping Group have been deployed to assess the situation to ensure the safety of all concerned and that peace and order is maintained,” Coloma said.

Earlier reports said some INC ministers had gone missing or were placed under house arrest, allegedly on orders of the group’s Sanggunian (Council).

On Thursday, July 23, INC minister Isaias Samson Jr told reporters that his family had been placed under house arrest for several days in their Tandang Sora townhouse in Quezon City.

Similar allegations were made in a YouTube video by Tenny Manalo, widow of the late Eraño Manalo who led the INC for 46 years as executive minister.

In the video, Tenny pleaded for help for the ministers who were allegedly abducted and have yet to surface.

The justice secretary added that if the alleged abductions were true, these would be classified as criminal offenses.

De Lima was referring to the handwritten signs reporters saw posted on the window of an INC building on Thursday afternoon.

Hours later, in an interview with reporters, Angel Manalo denied they were being held captive, and claimed that the sign was posted by a child as a joke.

The DOJ, however, said it will not touch on controversial issues internal to the INC. These topics include the group’s rules on membership and use of private funds, which have recently fueled controversy.

On Thursday, for instance, INC head Eduardo Manalo expelled his own mother and brother because of a YouTube video in which they claimed their lives were in danger.

While De Lima said the DOJ will not be intervening in how the INC uses private funds, she added that individuals are free to file private suits before the appropriate court.

The INC is facing a crisis in leadership, with corruption allegations and internal family feuds threatening to cause rifts in the 1.37-million strong church. – Rappler.com