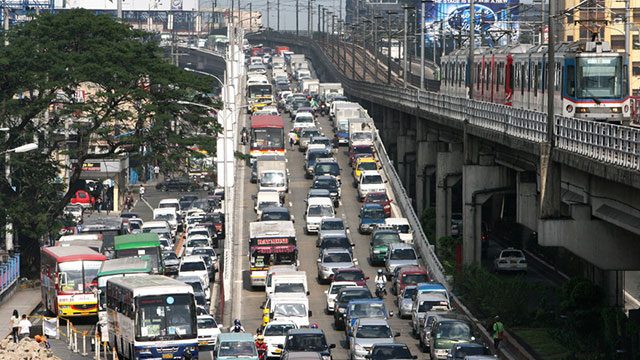 Facebook Twitter Copy URL
Copied
'The most radical solution is to cut the number of cars plying the roads – cars with odd and even plate numbers would take turns every week,' says the President

MANILA, Philippines – Less than a year before he steps down, President Benigno Aquino III is still awaiting the proposals of different government agencies on how to solve the worsening traffic situation in the Philippines.

But for him, the “most radical” solution would be to implement an odd-even traffic scheme – a proposal that he said would surely elicit negative reactions, especially from car owners.

(The most radical solution…is to cut the number of cars plying the roads – cars with odd and even plate numbers would take turns every week.)

(This would surely decongest traffic because half of the cars won’t be on the road, but many would surely oppose this because they won’t be able to use their cars.)

Citing figures from the Department of Trade and Industry, he noted that a total of 1.2 million new motorcycles were bought in 2014 alone. In addition, more than 22,400 new vehicles are being purchased every month.

(The result: of course, roads will be packed. And naturally, because of the traffic, the car and motorcycle you saved up for will quickly wear away because of exposure to carbon.)

With the growing number of vehicles every year, the President said the “ideal situation” to the country’s traffic woes is to build more bridges and to widen the roads. (READ: The Philippines and traffic jams)

But he admitted this would take years and countless discussions, especially when it comes to the issue of the right of way.

For instance, Aquino brought up again plans to retrofit the Guadalupe bridge – a similar example from his State of the Nation Address last July. He also mentioned another needed construction: a new bridge that will cross the Pasig River, from Global City to Shaw Boulevard.

But he lamented that both plans are facing opposition.

He appealed to the public to cooperate and be more patient and understanding.

In a separate statement on Thursday, Palace Communications Secretary Herminio Coloma Jr said that, despite the challenges, government “continues to address the traffic situation.” (WATCH: The cost of traffic in Metro Manila)

He also revealed that under Aquino’s instructions, Cabinet Secretary Jose Rene Almendras is already consulting with “various stakeholders” in integrating “action proposals” from the following agencies:

The Japan International Cooperation Agency estimated that the Philippines stands to lose up to P6 billion a day by 2030 because of worsening traffic jams. – Rappler.com