Aug 27, 2015 10:23 PM PHT
Rappler.com
Facebook Twitter Copy URL
Copied
(3RD UPDATE) Iglesia insiders say they were instructed after their church service on Thursday to proceed to the Department of Justice to fight for faith and doctrine 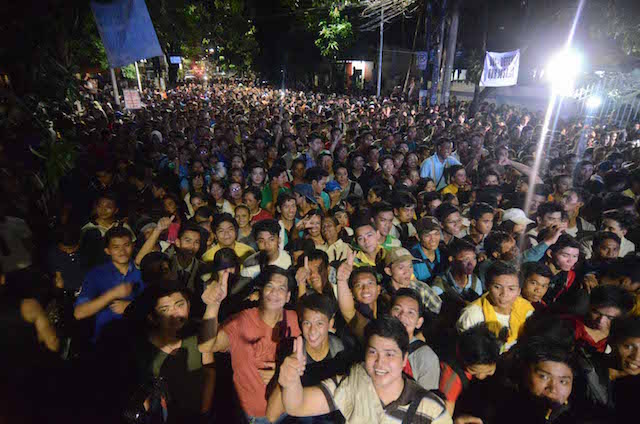 MANILA, Philippines (3rd UPDATE) – Members of the Iglesia ni Cristo (INC) massed up in front of the Department of Justice (DOJ) Thursday night, August 27, following instructions from their ministers to fight for their faith and doctrine.

Iglesia insiders told Rappler they received instructions after their regular church service Thursday to all go to the DOJ. If asked by the media why they are there, “our answer should be that we are fighting for our doctrine and our faith, pananampalataya at doktrina,” said one Iglesia member.

By the evening, a stage had been set up along with speakers and an LCD screen. “Walang uuwi (no one goes home),” blared the speakers as rain began to fall.

The stage was decked with tarpaulins that bore messages relating to the freedom of religion.

“Freedom of religion. Church and state separation. Take this into consideration!” said one.

Another said, “Sa pag-unlad ng bayan, respeto ang kailangan.” (Respect is needed for the progress of the nation.) 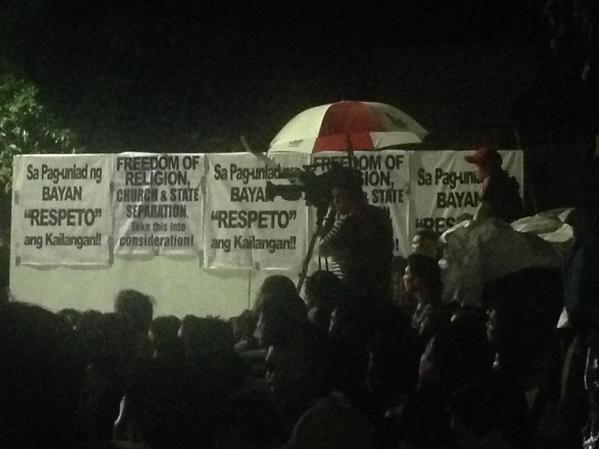 INC followers began to gather in front of the DOJ gates earlier in the afternoon supposedly to protest the bias of Justice Secretary Leila de Lima. Their rally against De Lima came after expelled INC minister Isaias Samson Jr filed an illegal detention case against INC leaders before the DOJ.

De Lima happened to be celebrating her 56th birthday on Thursday, the same day she confirmed she would be running for senator in 2016. INC followers said they would not vote for her.

Up to 1.37 million of an estimated 52 million Filipino voters, or about 2.6% of the voting population, belong to the INC.

Earlier in the afternoon, those who were asked why they were at the DOJ said, “Nakiki-birthday lang (Just joining in the birthday celebration).”