Why De Lima is target of Iglesia ni Cristo’s anger 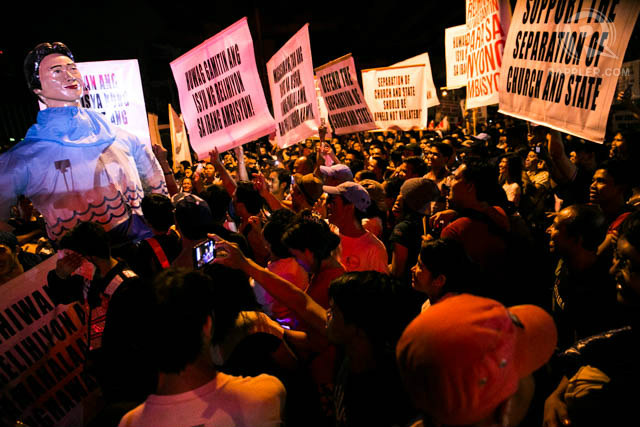 MANILA, Philippines (3rd UPDATE) – Hundreds of Iglesia ni Cristo (INC) members cheered wildly when an effigy, which looked like Justice Secretary Leila de Lima, was paraded on the site of their anti-government rally.

The effigy, which was around 10 feet tall, was clothed in a traditional dress for Filipino women.

The INC protestors past midnight on Saturday, August 29, chanted as the effigy passed by: “De Lima, pabebe! De Lima, pabebe!” (Pabebe is Filipino slang for “trying to be cute.”)

Behind this effigy, another followed. For protestors, the other effigy looked like expelled INC minister Isaias Samson Jr, who filed an illegal detention case against INC leaders before the DOJ.

A serious illegal detention charge carries with it a penalty of life imprisonment and is a non-bailable offense. The case filed by Samson is reminiscent of the case involving businesswoman Janet Lim Napoles, who has been convicted for the illegal detention of Benhur Luy in the pork barrel or Priority Development Assistance Fund  scam. Napoles was sentenced to reclusion perpetua or imprisonment of up to 40 years.

Minutes before these effigies arrived, INC members hurled other insults against De Lima.

When an ambulance passed by the protest site, for example, a few members of this Christian group cheered: “Isakay si De Lima!” (Put De Lima there!)

De Lima and Samson have been the focus of the INC’s vigil which began in front of the Department of Justice building in Manila on Thursday, August 27, and moved on Friday evening, August 28, to the iconic EDSA highway.

For the past few days, De Lima, in particular, has become the target of the INC’s anger aimed at the administration of President Benigno Aquino III. (READ/WATCH: INC members: ‘Why, why, why, De Lima?’) 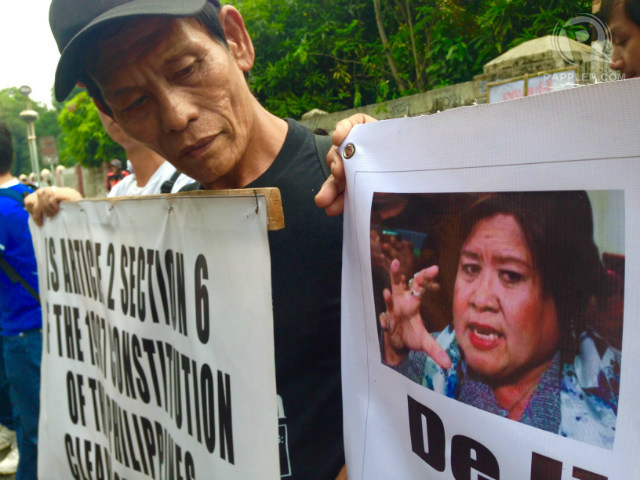 In their protest along EDSA, the site of the peaceful 1986 revolution that toppled dictator Ferdinand Marcos, INC members called for De Lima’s resignation.

Interviews with INC members, however, showed the lies spreading among them about De Lima. The interviewees refused to be named because their leaders barred them from speaking to reporters.

One of them, a 43-year-old INC member who joined Friday’s gathering, said their leaders informed them that De Lima is about to issue a warrant of arrest against INC ministers.

This is false because, in the Philippines, only a court can issue an arrest warrant.

“Anong nira-rally nila? Wala pa ngang naka-assign na prosecutor,” Angeles said on Twitter. (What is their rally about? There’s no prosecutor assigned, in the first place.)

Serafin Cuevas Jr, in an interview over the religious denomination’s television channel NET 25 on Saturday, August 29, also hit De Lima’s apparent “partiality, bias, and prejudice against the church, more particularly against the respondents.”

Pointing to the special attention she has given the complaint of Samson, Cuevas said in Filipino, “The filing and receiving of a criminal complaint of a person can be done before a prosecutor… Or it can simply be received at the docket and be brought later to a prosecutor on duty for the swearing in.” But instead, De Lima personally appeared to the Samson family, as reported on national television.

Cuevas said that given circumstances, they couldn’t help but think De Lima “wants something from INC” in relation to the 2016 elections.

De Lima, who was marking her 56th birthday when the rally began on Thursday, brushed off the INC’s claims. The feisty De Lima said, “I’m just doing my job here.”

Malacañang came to the justice chief’s defense. President Deputy Presidential Spokesperson Abigail Valte said in a radio interview on Saturday that the case involved is not directed against the entire organization but only against certain members.

The DOJ has not acted on the case, which would have to follow the normal process as provided under law, she added.

When asked, the Palace official expressed confidence that De Lima would not be pressured by the INC rally. “Secretary De Lima has established herself as one who does her job. Let’s look at the stand taken by Secretary De Lima in previous cases and the personalities involved.”

Valte also said that just like any other Cabinet official, De Lima’s continued service to the administration would depend on Aquino’s assessment of her performance.

De Lima is set to run for senator in May 2016, and is now unlikely to get the INC’s blessings. The politically influential church votes as a bloc, which is why politicians try their best to please the INC.

Up to 1.37 million of an estimated 52 million Filipino voters, or about 2.6% of the voting population, belong to the INC. They boast of this clout to politicians although the recent upheaval within the church has cast doubt on how solid it remains. – with Buena Bernal/Rappler.com