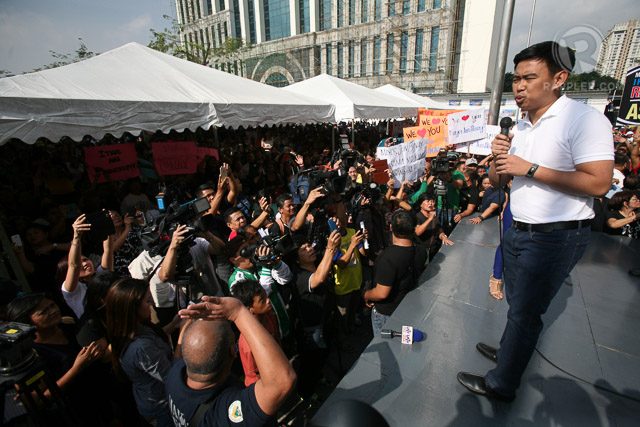 Facebook Twitter Copy URL
Copied
The appellate court deems Binay's petition as 'overtaken, if not superseded' by his recent dismissal order from the Ombudsman

MANILA, Philippines – The Court of Appeals (CA) has junked the petition of  dismissed Makati mayor Jejomar Erwin “Junjun” Binay Jr against the Office of the Ombudsman’s second suspension order against him.

In its 3-page resolution promulgated on Friday, October 30, the CA said the petition has been rendered moot because of the Ombudsman’s dismissal order against Binay, and his perpetual disqualification from holding public office over the alleged overpricing of the Makati City Hall Parking Building II.

“This court takes judicial notice of the foregoing issuance which became the subject of extensive coverage in both print and broadcast media. In light of this supervening event, we opined that whatever relief we grant to petitioner in this case whether we will restrain, enjoin or nullify his preventive suspension, the same will no longer serve any practical value,” the CA resolution said.

The appellate court added that while Binay’s second preventive suspension order may not have been prescribed, it has been deemed “overtaken, if not superseded” by the dismissal order from Morales.

“Petitioner, having been dismissed from his post as Makati Mayor, will not be able to take it back regardless of how we resolve the validity of his preventive suspension in the present case,” the resolution said.

“Accordlingly, the petition is dismissed on ground of mootness,” it added.

Prior to Binay’s dismissal, Ombudsman Conchita Carpio-Morales issued two suspension orders against him, first a 6-month preventive suspension order in March over the alleged anomalous contract for the city hall building.

Binay managed to obtain a temporary restraining order (TRO) and later a temporary injunction, which stopped his suspension. The Ombudsman questioned the CA resolution before the Supreme Court, and the matter is currently pending.

Three months later, the Ombudsman issued a second suspension order against Binay and 14 other officials, this time for the supposed overpricing of the Makati Science High School building.

Binay then asked the CA to issue another TRO, but the appellate court dismissed his petition on Friday.

Consequence of an ‘illegal’ resolution

Joey Salgado, a spokesperson of Vice President Jejomar Binay, said the Binay camp has no copy of the resolution as of posting.

However, Salgado said that the younger Binay’s lawyers “have been expecting this.”

“It is a consequence of [the] illegal resolution of Ombudsman Morales dismissing Mayor Binay, even in the absence of compelling evidence,” he said in a text message sent to Rappler on Friday afternoon.

“The mayor’s lawyers have filed a motion for reconsideration on the said Ombudsman resolution,” Salgado added. – with reports from Mara Cepeda/Rappler