PH to get 3rd Hamilton-class warship from US 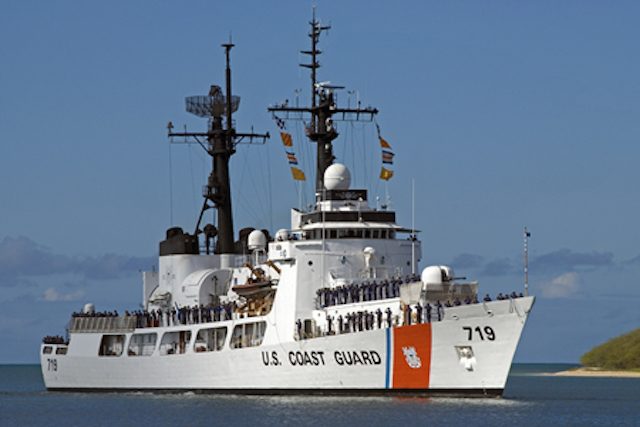 MANILA, Philippines – The Philippine Navy will be getting a Hamilton-class cutter from the US Coast Guard, the yet to be decommissioned CGC Boutwell, which is the same class as the Philippine warship that US President Barack Obama visited on Tuesday, according to a White House statement.

“This will provide the Philippines the ability to maintain greater maritime presence and patrols throughout its EEZ (Exclusive Economic Zone),” the statement said.

Obama, who is in Manila for the Asia-Pacific Economic Cooperation (APEC) Summit, toured BRP Gregorio Del Pilar as the US stepped up rhetoric against China’s aggressiveness in the South China Sea. Chinese President Xi Jinping is also in the country.

Obama announced the transfer of 2 ships to the Philippines in a speech after the tour but he did not provide details. The other ship to be transferred is the oceanographic research vessel M/V Melville. Both ships will be transferred through the Excess Defense Articles (EDA) program. CGC Boutwell is set to be decommissioned early next year. It was known for its rescue operations, drug seizure and interdictions, and the defense of oil terminals on the coast of Iraq.

It’s the 3rd Hamilton-class cutter for the Philippines, which acquired BRP Gregorio Del Pilar in 2011 and its twin BRP Ramon Alcaraz in 2013. Both warships have since been armed with additional weapons and regularly deployed to patrol the West Philippine Sea (South China Sea) in tandem with newly acquired brand new naval choppers.

The Hamilton-class, renamed Del Pilar-class by the Philippine Navy, is a high-endurance cutter capable of extended patrols and can withstand heavy weather and rough seas. They were previously the largest cutters of the US Coast Guard until they were recently replaced by the National Security Cutter class.

They are currently the navy’s most capable warships as the acquisition of two brand new frigates is still in the pipeline.

R/V Melville, on the other hand, is equipped with capabilities such as”deep-towing cameras, deploying massive moorings, precisely maneuvering remotely-operated vehicles thousands of meters below the ship, and launching unmanned aircraft used to measure gravity and atmospheric physical properties.”

The US pledged $259M of support to develop the maritime capabilities of its Southeast Asian allies at a time when countries in the region are fighting China’s aggressiveness in the South China Sea.

The Philippines, one of Washington’s most loyal allies in Asia and one of the fiercest critics of China’s actions in the South China Sea, will get the bulk of $79 million in assistance to bolster maritime security.

The US and the Philippines signed an agreement last year to allow the US military to construct facilities and preposition defense assets inside Philippine military assets. It has not been implemented however as the Supreme Court has yet to rule on its constitutionality. (READ: No verdict yet on EDCA)

The US also vowed to increase exercises with the Philippine military and continue to support the National Coast Watch System, envisioned as the “brain” of Philippine maritime law enforcement operations. – with reports from Carmela Fonbuena/Rappler.com