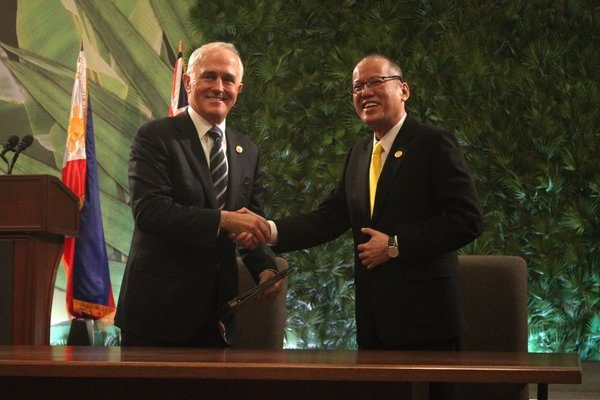 Facebook Twitter Copy URL
Copied
In a separate meeting, Australian Foreign Affairs Minister Julie Bishop vows to give an estimated P200 million over the next 3 years to support the GPH-MILF peace process

MANILA, Philippines (UPDATED) – Australia is planning to give additional defense and disaster response equipment to the Philippines, one of its long-time allies in the region.

Australian Prime Minister Malcolm Turnbull conveyed the plan in a joint statement with President Benigno Aquino III, which they delivered after their bilateral meeting  on Thursday, November 18.

“We’ve had a very good discussion today about the work we can do together in terms of defense cooperation and we appreciate your thanks for the landing craft – the heavy landing crafts that we provided to the Philippines. We look forward to more support in that area,” said Turnbull, who is in Manila for the Asia-Pacific Eocnomic Cooperation (APEC) Economic Leaders’ Meeting.

In July, Australia formally handed over two Landing Craft Heavy (LCH) ships to the Philippine Navy. The supply ships are 44.5 meters long, have a speed of 10 to 13 Knots, and are capable of carrying up to 180 tons of cargo.

The ships are also used for disaster and humanitarian response.

Aquino said that since 1946, the Philippines and Australia have cooperated in all aspects of its bilateral relations, including humanitarian assistance and disaster response.

“It is this long legacy of cooperation that we pay tribute to today, in signing the Joint Declaration on Philippines-Australia Comprehensive Partnership. The Declaration acknowledges the increasing breadth and depth of our relations, which sets the tone, pace, and direction of our relationship in the years ahead,” he said.

The Philippine leader said he and Turnbull  also “exchanged views on regional security challenges, including maritime security, and, with this, committed to continue our bilateral consultations on how to address them.”

“The Prime Minister and I committed to continue working closely towards more substantive and meaningful activities between the Armed Forces of the Philippines and the Australian Defence Force to build trust and confidence and enhance interoperability,” he added.

Australia supports the Philippines’ stand on the peaceful resolution of the disputes in the West Philippine Sea (South China Sea), even as it continues to provide military training and education to its Southeast Asian ally.

In 2007, the two countries signed the Status of Visiting Forces Agreement (SOFVA), which entered into force in September 2012. The SOFVA is an agreement between the Philippines and Australia that establishes procedures for exchanges of troops. The SOFVA provides a comprehensive legal framework for the presence of Australia’s forces in the Philippines and the latter’s forces in the former. The 2 parties assume the same obligations under this reciprocal agreement.

Turnbull also welcomed Aquino’s pledge to help Australia in fighting terrorism. Aquino said the Philippines will continue working with other nations to achieve so-called “de-radicalization” of individuals and groups who pose security threats.

In December last year, several people were hostaged inside a café in the central business district of Sydney by presumed terrorists.

In a separate statement, Australian Foreign Affairs Minister Julie Bishop vowed to give $4 million or an estimated P200 million over the next 3 years to support the peace process between the Philippine government and the Moro Islamic Liberation Front.

“In my meeting with Secretary Teresita Quintos Deles, I confirmed Australia’s commitment to promoting development and prosperity in conflict affected regions of Mindanao in the Southern Philippines,” Bishop said on November 16.

The two countries also signed two deals on the Comprehensive Partnership Agreement and the Memorandum of Understanding on Cooperation in Technical Vocational Education and Training (TVET).

Aquino said the TVET will allow the two countries “to share knowledge, information, and best practices with each other, particularly in areas of mutual interest, and collaborate on significant projects that will enable both the Australian and the Filipino peoples to take hold of their own destinies.” – Rappler.com