No ‘trash’ talk in PH-Canada meeting 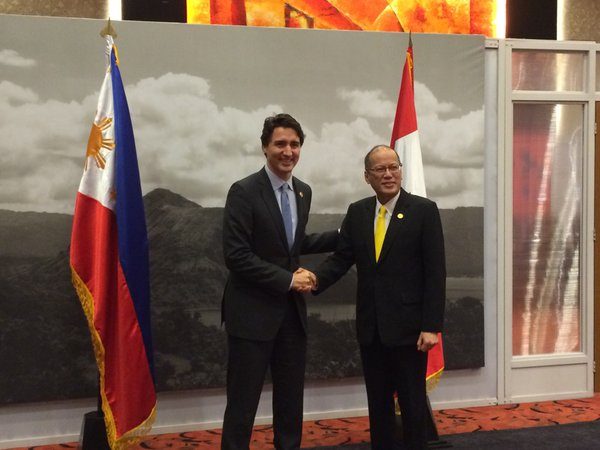 Facebook Twitter Copy URL
Copied
With no talks on the controversy, the bilateral meeting focuses only on the 'strong' Philippines-Canada relations

MANILA, Philippines – It was one of the more controversial topics on the sidelines of the Asia Pacific Economic Cooperation Summit held in Manila, as various groups called on Canada to take back the tons of garbage illegally dumped in the Philippines.

But the hype ended when President Benigno Aquino III and Prime Minister Justin Trudeau skipped the issue in a bilateral meeting on Wednesday, November 18.

Asked about it, Palace Communications Secretary Sonny Coloma said the issue was “not in the agenda.”

In May, the Bureau of Customs (BOC) discovered 98 container vans at the Manila International Container Port (MICP), which BOC documents show, came from a company based in Ontario, Canada.

While Trudeau was sworn into office only in November, the estimated 1,375 tons of garbage remain on Philippine soil to date.

Some Filipino lawmakers have urged the government to invoke the Basel Convention, which was ratified by both countries.

Under Article 9 of the Basel Convention, hazardous and other wastes illegally moved overseas should be “taken back by the exporter or the generator, or if necessary, by itself into the State of export” within 30 days after discovery of the “illegal traffic.”

The country of origin “shall not oppose, hinder or prevent the return of those wastes.”

With no talks on the controversy, the bilateral meeting focused only on the “strong” Philippines-Canada relations, as Aquino cited the “dynamism of the Filipino-Canadian community”.

Coloma said Aquino thanked Trudeau for making the Philippines a “Country of Focus” or one of the 25 countries that will receive 90% of Canada’s bilateral Official Development Assistance (ODA).

In a note, Coloma said Trudeau recognized the “tremendous potential” for growing trade between the two nations.

With this, the Prime Minister assured Aquino that Canada would support the Philippines’ possible entry to the Trans-Pacific Partnership, a free trade agreement among 12 Pacific Rim countries, including Canada and the United States. – Rappler.com