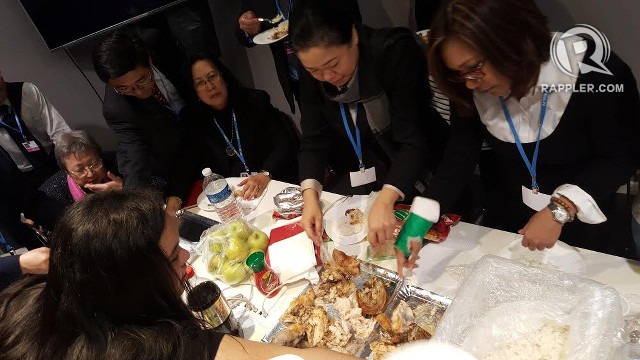 LE BOURGET, France – Hours from history being made at a UN climate summit (COP21) in Paris, the Philippine delegation is taking a break the good ol’ way: a Filipino salu-salo.

The meal is special because it may be the last one before the world adopts a landmark agreement on how it will curb climate change in the next 50 years.

It began the traditional way: Filipino negotiators and their staff gathered around the table in prayer.

With a limited number of chairs, some delegates ate while standing. But no one minded because time was of the essence. The salu-salo was to be the only down-time before the release of the final UN climate agreement.

After this lunch, the forks and spoons would be set aside, replaced by pens and paper as negotiators poured over each and every line of the pact.

In the next few hours, they would decide whether or not the Philippines will adopt the agreement.

It was especially prepared for the delegation by a group of Filipinos based in Paris, called the Batangas Association.

The group, led by Batangeña nurse Cornelia Mendoza Mistruzzi, reached out to the Philippine delegation only the previous night to say they would take care of today’s food.

The chicken had to be picked up from a train station in a nearby town. Upon arriving at Le Bourget the conference venue, it had to go through strict security checks.

“The guards had to open all the soy sauce bottles to make sure they weren’t bombs,” said Climate Change Commission staff member Alfred Anciado.

But all the hard work was worth it. For at least a few minutes, Philippine negotiators would be able to taste a little bit of home. This is the first Filipino meal the delegation has had together.

And there’s more to come. The Paris-based Filipinos have even volunteered to host their home country’s delegation to a party near famous shopping district Champs Elysee, hopefully to celebrate a climate agreement.

Paris may be on the other side of the world from the Philippines, but negotiators here never forget they’re fighting for home. – Rappler.com