IEC: The event that helped make Tagle a ‘papabile’ 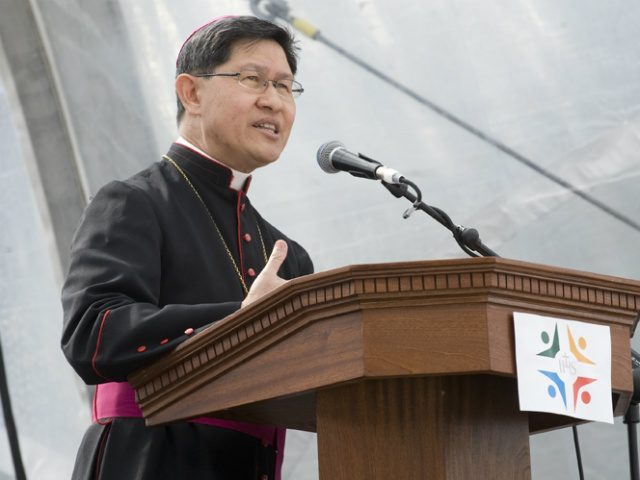 MANILA, Philippines – One of the biggest events in the Catholic Church, the International Eucharistic Congress (IEC) trains the spotlight on the who’s who for the world’s 1.2 billion Catholics.

One of them is the Philippines’ own – Manila Archbishop Luis Antonio Cardinal Tagle.

Call him a “suki (patron)” of the IEC, having been invited to speak twice in what is like the APEC Summit of the Catholic Church. (READ: First IEC in PH: Cardinal Vidal’s First Communion, too)

In fact his speeches at the IEC, which drove people to tears, helped in making him a popular contender for the papacy – in the words of Vatican watchers, a “papabile.” (READ: Tagle’s words that struck the world)

Veteran Vatican analyst John Allen Jr wrote in February 2013: “Tagle is a gifted communicator, making him a sought-after speaker and media personality. He drew rave reviews for his performance at the 2008 International Eucharistic Congress in Quebec, where observers say he brought an entire stadium to tears.”

Allen wrote this when he included Tagle in his “Papabile of the Day” series, weeks before Catholic cardinals elected Pope Francis.

A charismatic speaker with his own TV show, Tagle spoke at the 49th IEC in Quebec, Canada, in 2008. He also addressed delegates at the 50th IEC in Dublin, Ireland.

In these events, Tagle – as he always does – discussed not only theology but also issues affecting society. (READ: Cardinal Tagle: Gift of self can overcome hatred)

The IEC, after all, is more than a theological conference. This is because for Catholics, the topic of the IEC – the Eucharist or the Mass – has a “social dimension.”  This means it has to affect the way Catholics live their daily lives.

Tagle, for instance, delivered a scathing rebuke of modern evils such as capitalism at the 49th IEC in Quebec.

Tagle said: “It is sad that those who worship idols sacrifice other people while preserving themselves and their interests. How many factory workers are being denied the right wages for the god of profit? How many women are being sacrificed to the god of domination?

In the same event, he also condemned luxurious treatment for Catholic priests.

“Ecclesiastical customs and persons, when naively and narrowly deified and glorified, might become hindrances to true worship and compassion,” the Manila archbishop said.

He also said: “I am disturbed when some people who do not even know me personally conclude that my being a bishop automatically makes me closer to God than they could ever be. ‘My words are God’s words, my desires are God’s, my anger is God’s, and my actions are God’s.’”

“If I am not cautious, I might just believe it and start demanding the offerings of the best food and wine, money, car, house, adulation, and submission. After all, I am ‘God’! I might take so much delight in my stature and its benefits that I might end up being callous to the needs of the poor and the earth,” Tagle said.

Four years after this, at the 50th IEC in Dublin, Tagle addressed sexual abuse by the clergy.

“The best way to care for the offender is to make him face up to the misconduct,” Tagle said at the IEC in 2012.

Four years later, Tagle is set to speak again at the IEC, this time hosted by Cebu City, Philippines.

Tagle is scheduled to speak from 9 to 10 am on Thursday, January 28, on the topic, “The Eucharist and the Dialogue with Cultures.”