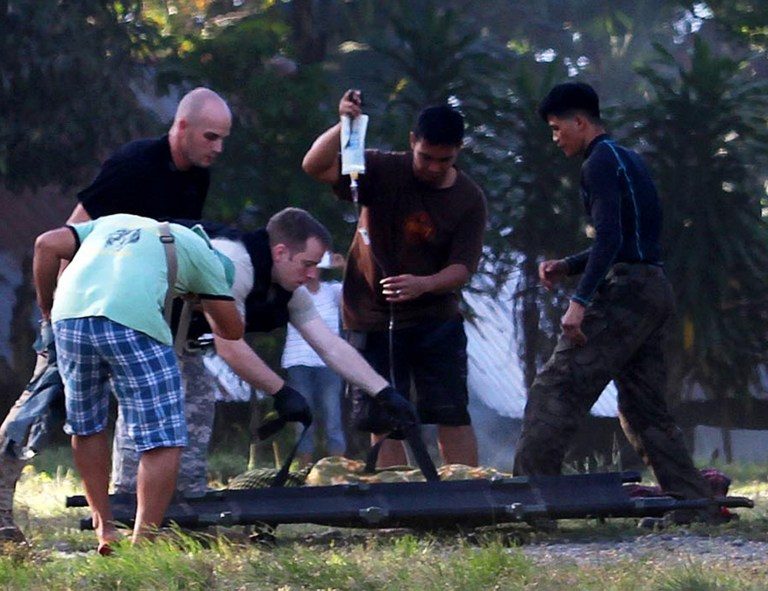 Facebook Twitter Copy URL
Copied
The hearing is likely to center on one question: what did President Aquino do – or failed to do – in the planning, execution, and aftermath of the anti-terrorist operation

MANILA, Philippines – One year and two days after a botched police operation claimed the lives of more than 60 Filipinos, including 44 elite cops, the Senate is set to re-open its investigation on Wednesday, January 27, amid a heated political season.

Unlike the probe in 2015, this year’s public hearing is likely to center on one question: what did President Benigno Aquino III do – or failed to do – in the planning, execution, and aftermath of an operation to neutralize wanted terrorists? (WATCH: LIVE: Joint public hearing on Mamasapano)

The ruling Liberal Party’s presidential candidate, Manuel Roxas II is among the guests invited to the probe called by a committee headed by his rival in the May 2016 presidential race, Senator Grace Poe. Roxas was interior secretary during the ill-fated operation that saw him out of the loop.

Another 2016 candidate, independent senatorial bet Diosdado Valeroso, a retired police general, claims to have an audio recording of a “high-ranking government official” and a legislator, supposedly discussing a cover-up of the clash for the sake of the proposed Bangsamoro Basic Law.

Although not invited to Wednesday’s hearing, Valeroso said he would be there to observe.

Yet another retired general who played a key role in the operation, sacked Special Action Force (SAF) chief Getulio Napeñas is running for senator under the opposition United Nationalist Alliance.

Other officials invited to the probe are:

The clashes in Mamasapano town, Maguindanao, were triggered a year ago by “Oplan Exodus,” a Philippine National Police (PNP)-SAF operation against terrorists wanted by both the Philippines and the United States. Senator Juan Ponce Enrile, who pushed for today’s re-opening of the probe, said he has new evidence to prove the President did nothing to save the trapped Special Action Force troopers during the operation.

It’s a fact that Aquino had intimate knowledge of the operation before it happened – something he initially did not admit. (READ: What did Aquino know?)

A month after the clash, in February 2015, Enrile himself cautioned his allies in the Senate against using SAF to hit Aquino. The senator was then detained over plunder charges in the pork barrel scam. (READ: Enrile advises allies: Don’t use SAF to hit Aquino)

After more than two months of public hearings, the Senate in March 2015 concluded its probe and held Aquino responsible for what happened. (READ: Senate report: ‘Aquino must bear responsibility’)

Two months after his release, Enrile asked Poe about updates on the report (READ: JPE to Grace Poe: What happened to Mamasapano report?)

Enrile said he shares the families’ fear that the issue would be “quickly drowned” by the 2016 elections. After all, he said then, many of those who expressed sympathies and commitment for justice are “now aspiring to be the next top leaders of the nation.”

“They nurse the understandable fear that the injustice done to them would just as quickly be drowned by the noise and frenzy of the 2016 election fever; and that if the tragedy is at all mentioned, such would only be used for political propaganda,” Enrile said in a privilege speech on October 7, 2015.

Asked for her assurance that she would not use the Mamasapano incident to push for her political campaign, Poe at the time said, “Every single public official is accountable to the people at all times, election season or not.” In the aftermath of the clash, Aquino suffered his lowest approval ratings.

The President was also accused of being indifferent toward the plight of the dead, as he faced questions over his involvement and that of his friend, then suspended Philippine National Police chief Alan Purisima.

Since Enrile’s pronouncements and the Senate’s decision to reopen the probe, several other people have come forward, supposedly with information on the clash.

Presidential candidate and Davao City Mayor Rodrigo Duterte recently claimed he was at the command conference with Aquino and security officials in Zamboanga City on January 25, 2015. The mayor, however, has said he would only reveal what he knows under oath.

Valeroso, on the other hand, said he wants “truth, accountability, and justice” for the SAF troopers. However, Senate President Franklin Drilon, a member of the ruling Liberal Party, insists the recording should not be used in the Senate probe since it is covered by the Anti-Wiretapping Act.

“The Senate is not above the law. The senators should abide by the law. What I am saying is that the law is so clear and precise that it leaves no room for misinterpretation,” said Drilon in a statement released Tuesday, January 26.

The probe re-opening comes barely two weeks before the start of the campaign period for national officials for the May 9 elections.

Roxas’ poll numbers are tied to Aquino, given his campaign promise of continuing the supposed gains of the current administration. His spokesman has called on senators running for posts in 2016 to abstain from the probe.

Of the 5 senators running for vice president, only Cayetano has said he would inhibit from the probe. Another senator, Miriam Defensor Santiago, is running for president.

A handful of other senators are also gunning for re-election, including bets from the LP-led “Daang Matuwid” coalition. – Rappler.com