Who gamed the Rappler election poll? 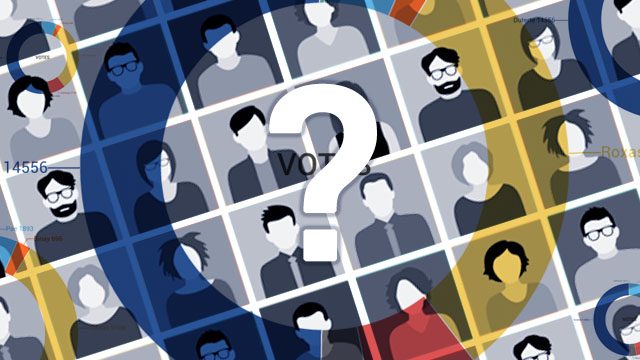 Facebook Twitter Copy URL
Copied
Besides our one-voter, one-vote system, we implemented additional security measures in January which eliminated the spikes and prevented the manipulation we detected

MANILA, Philippines – We discovered evidence of systematic, organized gaming in the survey that Rappler.com ran in December 2015.

At the time, Rappler began a monthly series of 3 digital surveys focusing on presidential elections via:

They’re part of our #PHVote Challenge that aims to involve more Filipinos in the choice of our next leaders.

Working with our election partners and Laylo Research Strategies, we wanted to explore integrating different disciplines, using probability sampling methods with the power of technology and big data to get a sense of changing sentiment and behavior leading to the May 9 ballot. (Read #PHVote Challenge: Take our online, text social media 2016 elections survey)

In the first of a series of surveys conducted the last two weeks of December, Davao City Mayor Rodrigo Duterte won overwhelmingly in both the SMS and Facebook surveys. He won again in January’s Facebook poll, receiving 80% of nearly 50,000 votes cast. Sources of votes for Mar Roxas

On Rappler.com, we earlier reported that former interior secretary Mar Roxas won the December poll, but an irregular surge vote in the first 3 days of polling in January led us to reevaluate the December results and spot a curious pattern.

An hourly breakdown of voting clearly showed the surge here. When we examined where the votes in the surge came from, we found most of them coming from 3 countries: Russia, Korea, and China. 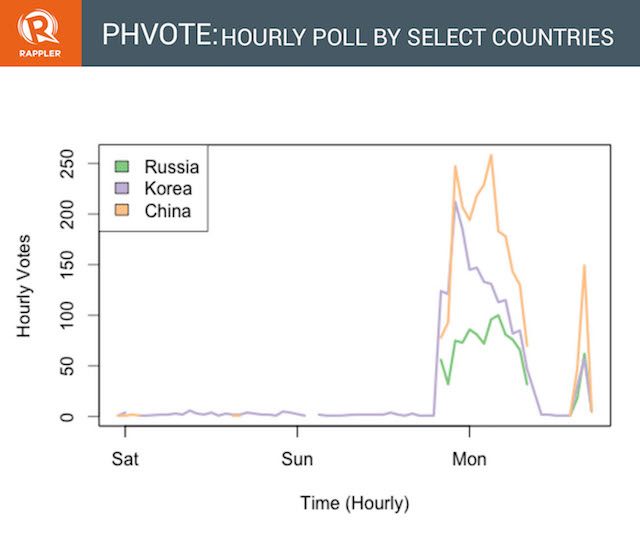 From the visualization, it is evident that Roxas received almost no increase in votes per hour until the surge, which peaked at around 1,400 votes per hour.

Typically, the volume trends up or down with the overall volume of traffic to our website. Also, legitimate votes should begin to taper out after several days because of our one-voter, one-vote system. Neither held true for Roxas.

Vote volumes also tend to increase or decrease for all candidates at the same time. Again, that didn’t happen for Roxas.

The chart above shows exactly how what appeared to be gaming, or at the very least, a last-minute attempt to manipulate vote preferences, was done.

Roxas was clearly the beneficiary of this manipulation, but the numbers and the sources of the vote surge do not allow us to identify who may have been behind the attempt to game the survey. This could be either his supporters or people out to discredit him.

The Roxas camp issued a statement that said: “We are extremely concerned by the Rappler article on suspicious online activity on online polling. That there is data suggesting foreign sources is particularly troubling because this is an election for Filipinos, by Filipinos. We are a campaign that has so many committed young people giving up their time and effort, that anything casting doubt on their commitment or efforts is not only a cause of great outrage, but deep alarm.”

The statement also said, “We support efforts to get to the bottom of this because it is troubling not only for our campaign but potentially for all campaigns, as it suggests outside efforts at manipulating public opinion. We are firmly committed to a campaign that empowers every Filipino to express his or her choice freely, and credibly, not only at the polls but in all public fora.” 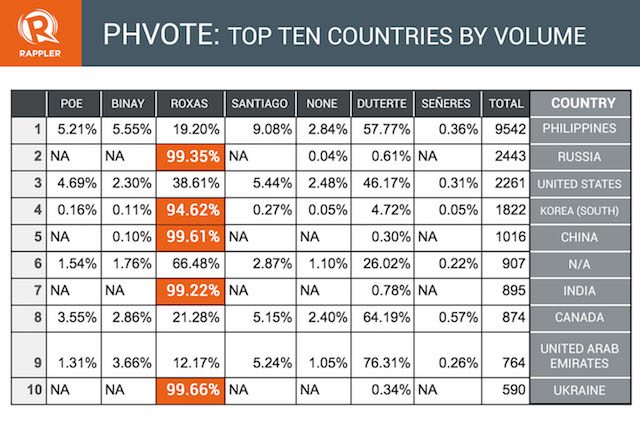 As a result of this detection, we implemented additional security measures in January which eliminated the spikes and prevented the manipulation we spotted. This was in addition to our existing one-voter, one-vote system. If we take out the fake votes for December, this would be the resulting non-manipulated votes on the Rappler.com poll: about 49% for Duterte, 31% for Roxas, 7.3% for Senator Miriam Defensor Santiago, 6.4% for Senator Grace Poe, and 2.35% for Vice President Jejomar Binay. For January, there were a total of 31,453 legitimate votes cast in the Rappler.com poll. The majority, 63%, went to Duterte. This matches what we’re observing in the virtual world: that Duterte has an organic social movement.  Although at times fanatic, his supporters are vocal in their exercise of democracy attempting to sway the undecideds.

The question, of course, is whether online support will translate to votes on May 9.

On the January SMS survey, Duterte had the “most engaged” followers, with 35% of responders also saying they will support the controversial Davao mayor. Roxas and Vice President Jejomar Binay were very close with 19% and 18%, respectively. Senator Grace Poe came in next with 14%.

Please stay engaged with the #PHVote Challenge. Answer the question: if elections were held today, who would you choose?

Months from now, the data you give could allow us to pinpoint exactly what events created decision moments for the winning candidate. – Rappler.com