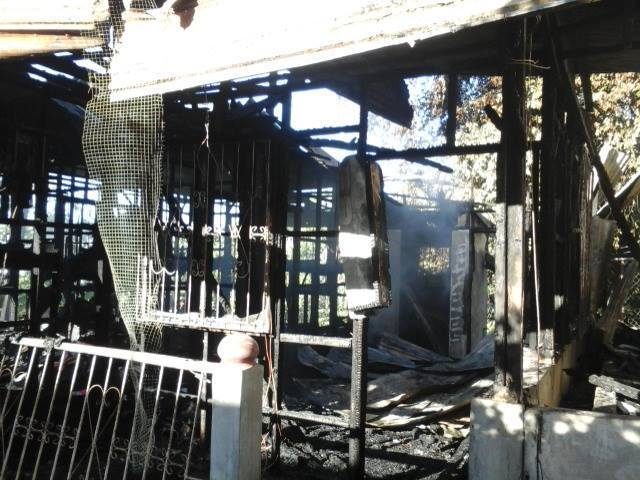 The incident happened at around 2 am Wednesday, February 24.

Jong Monzon, secretary general of Pasaka in Southern Mindanao, alleged that the pre-dawn fire was premeditated and intentional.

The dormitory at the Haran compound was used as an evacuation center for Lumad evacuees who had fled their homes from Talaingod, Davao del Norte, and Bukidnon.

The Haran compound, owned by the United Church of Christ in the Philippines (UCCP), has been off limits to everyone except the nongovernmental groups supervising them.

“We denounce the latest attack by what we believe to be forces from paramilitary groups against our Lumad brothers and sisters. As if the Lumad evacuees have not suffered enough, now even their evacuation camp is again being targeted,” Ridon said.

He said that based on eyewitness reports from Pasaka, 3 unidentified men in motorcycles poured gasoline on the canvass roofs of the refugees’ tents and then set them on fire.

“This is not the first time that the evacuation center at UCCP Haran has been targeted by paramilitary groups. We must note, however, that this new attack is even more pernicious, as the attackers seem hell-bent on killing the refugees through arson,” Ridon said.

The Duterte camp said in a statement that the mayor ordered an investigation of the fire, to determine if it’s a case of arson.

Prior to the issuance of the statement, the Save Our School Diliman condemned the “dastardly act” and demanded local government and state authorities to investigate the incident and punish those responsible.

SOS Diliman posed a challenge to candidates in the 2016 polls. “In this election season, we challenge politicians to take stock of whether or not they have figured a way to help the Lumad who continue to suffer from poverty, discrimination and utter neglect.”

It said that the presence of the Lumad camp in Haran and other parts of Mindanao reflected the government’s failure to protect the Lumad’s rights, their communities, and their schools.

“They have been victims of human rights abuses and summary executions in the hands of paramilitary groups backed by the Army. Lumad lands were eyed as sites for mines and industrial farms. Many of their schools, which are sanctuaries for learning and community activities, were razed and closed down while teachers and community leaders were harassed,” SOS Diliman said.

It reiterated its call for military and paramilitary troops to withdraw from Lumad communities.

Senator Miriam Defensor Santiago, a presidential candidate, condemned the incident and urged Congress to speed up the passage of the Rights of Internally Displaced Persons Act.

This, she said must “include…specific provisions on the rights of indigenous peoples.”

“We have failed the Lumads. Let us not renege further on our obligation,” Santiago said.

Former justice secretary Leila de Lima, who used to chair the Commission on Human Rights, also condemned the incident, and joined calls for an investigation.

De Lima, a senatorial candidate, proposed the review of the implementation of the  Indigenous People’s Rights Act (IPRA), to strengthen the protection of indigenous peoples.

“It’s about time we review the performance of the IPRA in upholding the rights of the indigenous people. How effect effective is the  NCIP (National Commission on Indigenous People) in carrying out its mandate to protect the interest of indigenous peoples, including the Lumad,” she said.

The evacuees began flocking to Haran compound last year, to escape alleged harassment by military and paramilitary forces in their communities.

In May 2015, more than 700 Lumad were displaced from Talaingod after alleged government forces and the Alamara occupied several villages in the town. Human rights groups reported cases of harassment and indiscriminate firing. (READ: TIMELINE: Attacks on the Lumad of Mindanao)

At a congressional inquiry in January, Datu Intu Sayad, a former NPA rebel, said that rebels who infiltrate Lumad communities make indigenous peoples vulnerable to attacks. (READ: Lumad: Caught in the middle of a war) – Rappler.com