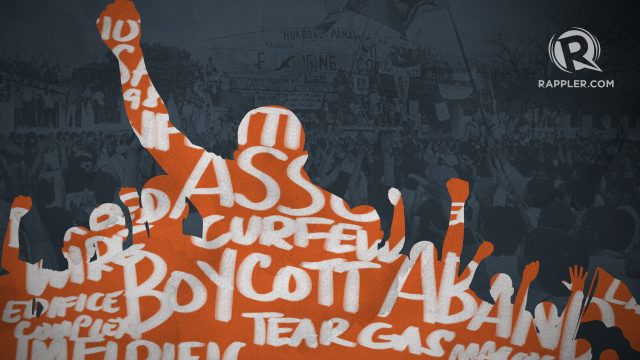 Facebook Twitter Copy URL
Copied
Only a few of the words here remain familiar to the generations that never experienced martial law. These words meant life and death to many.

MANILA, Philippines – The years leading up to the historical 1986 People Power Revolution were turbulent times for the country: late dictator Ferdinand Marcos, with his iron-fist rule, stayed in power for 20 years and imposed martial law for 9 years.

Those years saw numerous atrocities committed against thousands of Filipinos, especially those critical of the Marcos regime. But hope was not lost among brave men and women who joined the resistance movement – either in the streets or underground.

With free speech curtailed, activists communicated their anger in more ways than one. What words and phrases peppered their conversations then?

Below are some of the words that comprised the activists’ lingo in the 1980s, based on research and interviews with historian Michael “Xiao” Chua and Aurora Batnag, president of the Pambansang Samahan sa Linggwistika at Literaturang Filipino.

Abandonados – This term, Chua said, refers to Marcos loyalists post-EDSA who were “abandoned” by the dictator after he fled to Hawaii with his family and close allies on February 25, 1986, with the help of American authorities

ASSO (Arrest, Search, and Seizure Order) – According to Chua, the ASSO – an arrest without warrant – is a list you wouldn’t want your name to be in. “Hindi alam kahit nung humuhuli sa’yo kung bakit ka niya hinuhuli. Ganun siya ka-arbitrary.” (Even the one arresting you doesn’t know why you’re being arrested. That’s the extent of its arbitrariness.)

Barbed wire – Activists then considered the barbed wire as a symbol of oppression. At the time, gates of Malacañang in Manila had barbed wires, keeping protesters away from the seat of power.

Boycott – The act of boycott in the context of the martial law could mean two things, said Chua: to boycott an election that is “Lutong Makoy” (an election rigged by Marcos), or to boycott products, banks, and companies owned by Marcos’ cronies.

Confetti – Rallies in Makati’s Ugarte Field (now Ayala Triangle) were replete with yellow confetti – that is, yellow pages cut into strips of paper and dropped by employees from their offices to support protesters against Marcos.

Curfew – The 12-4 am curfew hours during martial law lasted for 5 years, from 1972 to 1977. Chua said another term related to curfew is “pa-morningan,” when people would rather stay where they are past midnight than risk going home.

Edifice Complex – This term used by stage and screen actor-director Behn Cervantes is a play on another term, Oedipus complex, and refers to Imelda Marcos’ penchant for building extravagant infrastructure projects for the arts. This includes the Cultural Center of the Philippines, the Folk Arts Theater, and the controversial Manlia Film Center, which collapsed while still under construction.

Imeldific – This term, a play of the First Lady’s name, was used to refer to being extravagant and vulgar. But Chua said Imelda herself claims the term and interprets it to mean “excessively beautiful.” During his interview with the First Lady, Chua recalled that Imelda even referred to her dog as Imeldific after it ate caviar.

Metrocom – One of the most feared words then, according to Batnag, was the Metrocom or the Metropolitan Command – troops who detained anyone who’s still out in the streets past the curfew hours.

Salvage – This term was used back then when referring to extrajudicial killings.

Suspension of the privilege of writ of habeas corpus – Chua explained: “Wala kang karapatan, tinatanggalan ka ng karapatan na dalhin sa korte ‘yung katawan mo para makasuhan ka, kasi wala kang kaso. ‘Pag inaresto ka nung martial law wala kang kaso, pero in detention ka, ‘di mo alam gaano katagal.” (You don’t have the privilege to be brought to court where you will be charged, because there is no case. You can be arrested during martial law even without a case, but you will be in detention, and you don’t know for how long.)

Tuta ng Kano (American lapdog) – this monicker was just one of the many used by activists against Marcos. One slogan goes: “Marcos, Hitler, Diktador, Tuta.”

Yellow ribbon – Inspired by the song “Tie a Yellow Ribbon ‘Round the Ole Oak Tree,” supporters of Marcos’ political rival, Senator Benigno Aquino Jr, tied yellow ribbons around the airport to welcome his return from the United States in 1983. He never saw the ribbons, though, as he was shot dead upon arrival. Chua said the yellow ribbon eventually became the symbol of Aquino’s wife Cory and the anti-dictatorship struggle.

One important word is missing above: Magkaisa. In separate interviews, both Chua and Batnag said magkaisa is that one word which best defines the generation that fought the Marcos regime.

Of course it’s also the theme song of the EDSA People Power Revolution – a peaceful revolution that toppled a dictatorship.

Chua said the song was composed by “pro-Marcos” Tito Sotto (now a senator), “who gifted it as his reconciliation call to Cory Aquino and EDSA, and the people.”

Chua said that historic event in February 1986, when Filipinos trooped to EDSA in protest, “is actually the people’s tribute to the activists of the 1970s and 1980s, because finally, here are the people joining them in the parliament of the streets.”

Batnag also joined the protests then, with her children in tow. There were threats she would lose her job at Surian ng Wikang Pambansa (now Komisyon sa Wikang Filipino) for supporting Cory, but she said even before the snap elections, the country was already very ripe for a revolution. Only a few of the words above remain familiar to the generations that never experienced martial law. But the words are still relevant and worth revisiting today, according to Chua, because these words meant life and death to many.

“But a lot of these words also symbolize hope for a better future. Pondering on the meaning of each word also makes us realize the journey that our fathers and mothers went through during that time to regain our freedom,” he added.

For Batnag, it’s also another way to move on from that painful part of our history.

(Every word then had meaning. Today, another way to remind us of what the situation was like then is through these words, because even the young people should know and understand what happened before. You cannot move on until you’ve fully understood the past.)

Both Chua and Batnag also warned millenials about the dangers of forgetting what happened during those tumultuous times.

“Martial law and People Power [are] not propaganda. Forgetting these two is tantamount to hijacking our own future. And definitely, the victim’s lives are not propaganda.”

Did we miss a word or phrase? Let us know in the comments section below! – Rappler.com