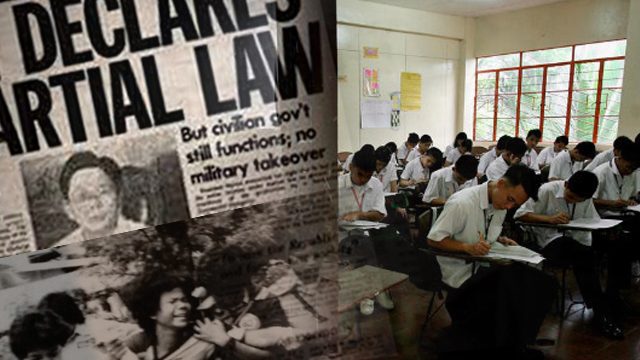 MANILA, Philippines – The Department of Education (DepEd) clarified reports about the “so-called” K to 12 book that supposedly “negates the history of untold abuses” during Martial Law and under the dictatorship of the late President Ferdinand Marcos.

“The so-called K to 12 Araling Panlipunan textbook, which was published in 2009, is not a DepEd-issued textbook and is being used by private schools. It must be noted that private schools have their own screening and selection processes in choosing which textbooks they will acquire and use,” DepEd said in a statement Thursday, March 3.

“DepEd also emphasizes that with the implementation of the K to 12 Program, curriculum guides for Grades 5 and 6 Araling Panlipunan have been designed to allow for more in-depth and enriched discussion on Philippine History which will include the Martial Law period.”

Youth group Anakbayan on Wednesday, March 2, called the attention of the government as one book, Lakbay ng Lahing Pilipino 5, “misleadingly claims that all of the Dictator Marcos’ programs were done to uplift the lives of Filipinos, while turning a blind eye to the trampling of human rights and civil liberties and systemic corruption.”

One report called the book a “K-12 book,” even if the book was first published in 2009 – 3 years before DepEd started implementing the K to 12 curriculum.

But Anakbayan national chair Vencer Crisostomo said the textbook is not an isolated case, because they have received reports “it is no different from what is being taught generally.”

Anakbayan’s statement comes a week after the country commemorated the 30th anniversary of the 1986 EDSA People Power Revolution that toppled Marcos. In one report, historian Michael “Xiao” Chua lamented there is not enough discussion in textbooks on human rights violations during the Marcos regime.

On Thursday, DepEd vowed to continue highlighting in its K to 12 curriculum “the importance of learning the lessons of history and preserving the gains of democracy.”

It also vowed to deepen the discussion on martial law and its impact on Filipinos today. (READ: Youth told: Don’t forget why EDSA happened)

“We remain faithful to our commitment to promote critical thinking among Filipino learners; we encourage them to examine and rediscover the importance of this historical marker in bringing Filipinos together to build a nation everyone deserves.” – Rappler.com