Nancy Binay to ask DOJ: Why is Ernesto Mercado at casinos? 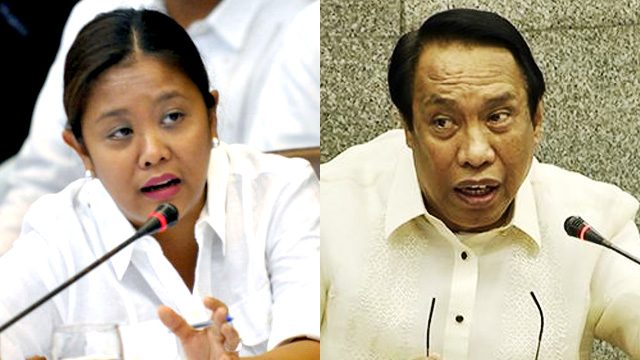 Facebook Twitter Copy URL
Copied
(UPDATED) The senator says she herself saw the ex-Makati vice mayor leaving a casino, and wants a clarification from the DOJ

PAMPANGA, Philippines (UPDATED) – Senator Nancy Binay plans to write a letter to the Department of Justice (DOJ) to ask why former Makati Vice Mayor Ernesto Mercado, supposedly under the Witness Protection Program (WPP), was seen leaving casinos in Clark over the weekend.

(Tomorrow, I will write to the DOJ to seek clarifications. You hear about complaints that the WPP lacks funds for other witnesses, then you’ll see someone under the WPP being accompanied [by bodyguards] inside a casino. This isn’t the first time either.)

Senator Binay said she saw Mercado emerge from the casino of the hotel where she and her family were about to check in past 3 pm on Saturday.

(Yesterday afternoon, I was just in the lobby when my husband whispered, “There’s Ernesto Mercado, on his way out of the casino.”)

The senator said she did not want to make a scene in the lobby, so she and her husband just decided to proceed to the elevator.

That was when she reportedly saw Mercado leaving the hotel, the name of which she refused to reveal, with around 7 to 10 bodyguards.

Mercado was a former vice mayor of Makati, where the senator’s father, Vice President Jejomar Binay, was mayor for 21 years.

Mercado had a falling out with the Binay family when the Vice President decided to field his son Junjun for mayor in the 2010 elections instead of Mercado. Junjun, now dismissed, beat Mercado in the 2010 polls.

Mercado was also a key witness during the yearlong Senate probe on the corruption allegations against Vice President Binay.

Mercado said he and the Vice President received kickbacks in various city government projects. He was placed under the WPP in September 2014. Two casinos in one day?

Another known ally of Binay claimed he saw Mercado leave another casino on Saturday evening.

Former Candaba, Pampanga mayor Jerry Pelayo said he briefly talked to Mercado at the Widus Casino and Hotel at around 9:30 pm on Saturday.

Pelayo said he came from a meeting at the hotel’s coffee shop when he saw Mercado in the lobby.

(You can quote me on that because it’s the truth.) According to Senator Binay, Mercado allegedly lost more than P50,000 on Saturday.

On Monday, Mercado was seen attending an International Women’s Day celebration sponsored by the Liberal Party (LP) in Makati Coliseum.Mercado’s daughter Karla is running for vice mayor under the LP.

Sought for comment, Senator Binay said Mercado may have graced the event to “replenish” his gambling money.

(He needs to be replenished. Maybe that’s why he was in the Makati Coliseum. He lost last Saturday, right? Perhaps he needs to show his presence there.)

(That’s what needs to be asked, then his daughter his running for vice mayor in Makati under the Liberal Party. So is the LP giving him the money for his gambling activities since his daughter is running under LP?)

Mercado declined to give a comment on the matter.

This is not the first time that the spotlight has centered on Mercado’s gambling activities.

At the beginning of the Senate investigation on the Vice President in 2014, a Makati city hall official said Mercado is not a credible witness because he is a gambler.

(I’m a frank person, I’ll admit it. I go to cock fights, I breed chickens. It’s a hobby. I won’t deny it. Casino? Once in a while, but just because you go to a casino, it doesn’t mean you’re gambling. I often eat at restaurants only. They’re telling me I’m in need of money and that I’m being used. Being used by whom?)

At the end of the Senate probe on his political rival, Mercado asked that the WPP be improved because whistleblowers face a number of risks, including death threats and failure to support their families. – Rappler.com