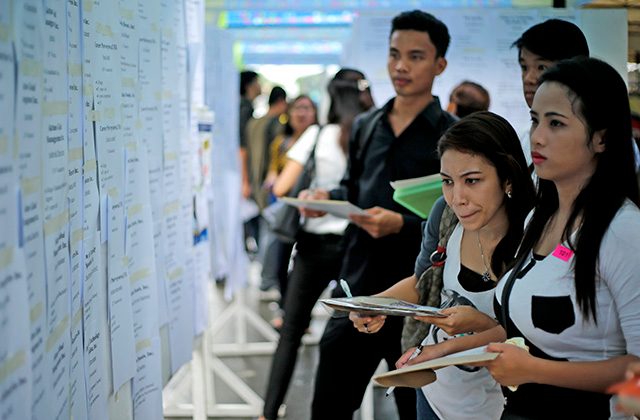 MANILA, Philippines – Congressional candidates for the May polls who are pushing for labor reforms said jobs mismatch remains a problem because the country does not have a long-term jobs road map.

Labor Secretary Rosalinda Baldoz said earlier this month that only 10 out of 1,000 Filipino applicants are getting hired because many lack the necessary skills needed for the jobs available in the market.

“The vacancies are really out there waiting for the qualified job applicants. Our biggest problem is the jobs and skills mismatch. It is only now that we’re aligning our education and training systems with the industry requirements using international benchmarked standards,” said Baldoz in a statement.

According to Sanlakas party-list representative first nominee Leody de Guzman, this is because the country’s local economy relies heavily on the economies of foreign countries.

Empower LGUs to give jobs

So what can be done to address the country’s long-standing jobs mismatch problem?

Akbayan party-list first nominee Tom Villarin said more funds should be allotted for local government units (LGUs), who can then create projects and livelihood programs specific to the needs of their constituents. (READ: NEDA: More Filipinos employed in Jan 2016)

(The problem now is that most jobs are centered in the urban areas, especially in the National Capital Region. We’re neither distributing nor decentralizing job generation.)

“There should be more money given to the LGUs,” he added.

Villarin cited a recent study conducted by the Department of Labor and Employment and Jobstreet that says 3 out of 4 locally employed Filipinos would rather accept jobs in their home region than work in another part of the country.

The same survey shows that two out of 3 Filipinos are currently working in their respective localities.

Partido ng mga Manggagawa party-list first nominee Rene Magtubo also said the Technical Education and Skills Development Authority should ensure that Filipinos are being trained for the in-demand jobs in the country.