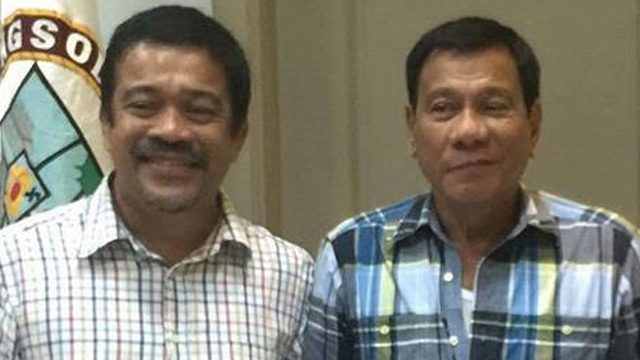 MANILA, Philippines – The Commission on Elections has just proclaimed Bayan Muna as among the winning party-list groups in the May 9 elections on Thursday, May 19, but its top nominee as its representative in Congress has a tough choice to make soon.

The NDF is expected to come up with a list of nominees to the 4 agencies offered by president-elect Rodrigo Duterte to the Left on Friday, May 20, the sources said.

“Yes, he is being selected as one of the recommendees. It’s up to Representative Zarate if he accepts the offer, and ultimately it’s up to Mayor Duterte if he will approve it,” one of the sources privy to the selection process being undertaken by the Left revealed on Friday morning, noting that Zarate is on top of the list for DENR chief.

“The Communist Party of the Philippines (CPP) and NDF representatives will personally deliver the list of recommendees along with letters of intent and CVs to Davao very soon,” the source added.

In a phone interview with Zarate, the lawmaker told Rappler that he is aware of the vetting process but has not yet received a formal invitation from the NDF.

“’Di ako magsasalita ng tapos (I won’t say anything final). My preference is to work in Congress,” Zarate said.

He noted, however, that if it will be formally offered to him, he will first consult his family, Bayan Muna, and the Makabayan bloc or the group of Left-leaning congressmen.

Zarate is one of the co-authors of the People’s Mining Bill filed by the Makabayan bloc in 2013. During the campaign, he challenged the presidential bets to address the issue of “destructive mining.”

“The present liberalized mining regime under the Mining Act of 1995 has only brought strife among our rural peoples, especially indigenous peoples, who are continuously displaced and affected by environmental destruction. The unbridled greed of liberalized mining literally plundered our resources and abused our people,” he stressed.

‪Zarate also said that he is “opposed to coal-fired plants as sources of energy,” noting that “climate change is real and coal is one of its culprits.”

He had criticized President Benigno Aquino III when he inaugurated a 300-megawatt coal-fired power plant in Davao City in January this year, a month after the Philippines signed the Paris Climate Change Agreement.‬

Zarate and other progressive leaders in Davao City met with Duterte on Tuesday, May 17. During the 30-minute meeting, the president-elect reiterated his offer to the Left to join his administration, Zarate said.

Zarate, a Davao-based human rights lawyer, has known Duterte since he was appointed as the city’s officer-in-charge vice mayor following the 1986 EDSA People Power Revolution that ousted the Marcos regime.

Zarate said that Duterte has established rapport with the Left in Davao City, noting that his fellow activists have engaged Duterte several times on various issues.

“In Davao, the progressive forces are independent. Our engagement with him is based on respect. Even if we argue, as long as it’s a principled one, he’ll not take it personally.” – Rappler.com

You can post information and opinion on Carlos Isagani Zarate on X.