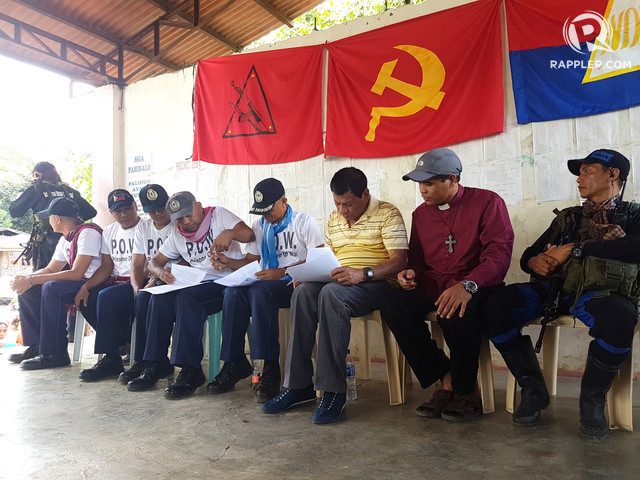 DAVAO CITY, Philippines – President-elect Rodrigo Duterte said he would release political prisoners even before the resolution of peace talks with the Communist Party of the Philippines, New People’s Army, and National Democratic Front of the Philippines as a “confidence-building” measure.

The prisoners to be released include Benito Tiamzon, leader of the CPP, and his wife Wilma, said Duterte during a press conference on Monday, May 23.

The two were captured by the military and police in March 2014, sparking condemnation from the CPP with whom the government had been reaching out for peace negotiations.

The military holds Tiamzon responsible for “the landmining, the killings, and the violence of the NPA.”

Duterte said he may even release the couple before the peace talks begin.

The political prisoners may be released even before the peace talks reach an agreement.

(I said, I will release as long as there are talks. I will release prisoners even before the resolution of talks, in good faith. Show of confidence building. Okay, I will let you go, let’s talk.)

Duterte will continue releasing prisoners within the duration of negotiations regardless of how well the talks are going.

Duterte has promised to end the 40-year insurgency of the communist rebels that has killed around 40,000 people. The CPP claims it has 150,000 cadres but the military puts their number at around 4,000.

The NDFP estimates that there are 543 political prisoners, 88 of whom are supposedly sick and elderly.

Duterte is friendly with Sison and other leaders of communist groups. (WATCH: Rappler Talk: Activists in Malacañang? Joma on Left’s Role in Duterte Gov’t)

Though admittedly a Leftist, he said he does not agree with the armed struggle of communists.

In a May 21 press conference he said, “In matters of national concern and security, I’ve always been a rightist. I’ve been with government and I’ve told the communists that I’m with government.” – Rappler.com