May 24, 2016 2:11 PM PHT
Pia Ranada
Facebook Twitter Copy URL
Copied
Duterte is on the look-out for a presidential spokesperson. He has given himself until the second week of June to finalize his appointments. 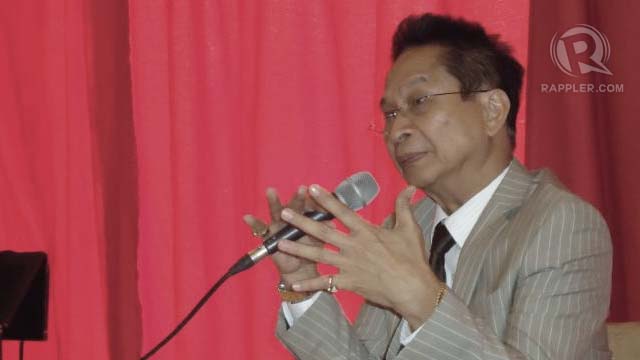 (Panelo is just temporary because I could not find a friend who I could request right then and there, ‘Okay, you be the one for now.’)

His choice of Panelo was met with criticism from journalist organizations who frown upon Panelo’s lawyering for the Ampatuan family members involved in the 2004 Maguindanao Massacre, the single deadliest incident involving journalists.

Duterte said Panelo was given the job in the meantime because “he enjoys my trust.” He also described him as “pugnacious.”

The Davao City mayor is now on the look-out for a presidential spokesperson. (READ: LIST: Who’s who in the incoming Duterte Cabinet)

The spokesperson also need not be a lawyer.

“We do not expect him to be a lawyer. Somebody who can explain to the public what is in the mind of the president,” he said.

Duterte is giving himself until the “second week of June” to finalize his Cabinet appointments. The government will officially be turned over to Duterte and his Cabinet on June 30, Inauguration Day.

While “most are final,” some appointees may be shuffled around the Cabinet to make way for new appointees.

He admitted having “difficulty” in looking for people to head the Department of Budget and Management and Department of Trade and Industry.

Meanwhile, he said he will most likely be appointing military men to head “corrupt” government agencies like the Bureau of Customs, Bureau of Immigration, and Philippine Drug Enforcement Agency.

Asked by media what could change his mind about his appointees by the second week of June, he said, “‘Pag mag-intriga ka sa akin laban sa kanila (If you show me intrigues against them).” – Rappler.com