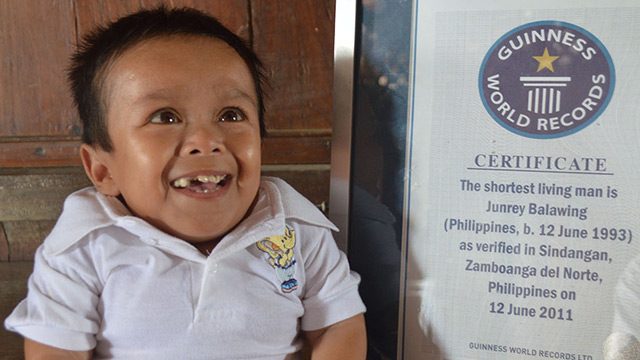 Facebook Twitter Copy URL
Copied
The Philippines ranks 10th in the world with the biggest number of children with stunted growth. What's being done about it?

ZAMBOANGA DEL NORTE, Philippines – The province takes pride in its world record holder: 23-year-old and two feet tall Junrey Balawing, declared in 1993 by the Guiness World Records as the shortest living man. Behind the fame is an ugly truth: Balawing lives in a province with the most number of stunted kids.

At least 38 percent of the Philippines’ 3.4 million cases of children with stunted growth are in Zamboanga del Norte, according to Evelyn M. Capistrano, the health department’s regional nutritionist for Zamboanga Peninsula.

“And most of the 38 percent are in (the province’s Municipality) of Sindangan, which is also the hometown of Balawing,” Capistrano said at a forum in Dipolog City on Thursday, June 9.

The Philippines ranks 10th in the world with the biggest number of children with stunted growth.

Stunted growth is caused by undernutrition, which slows down physical and mental growth, makes children prone to disease and death, and reduces productivity among adults, Capistrano said. “In fact, the Philippines’ 95 child deaths daily were associated with undernutrition,” she added.

If not corrected in the first 2 years of a child’s growth, undernutrition becomes permanent and irreversible.

Launching the Department of Health’s “1st 1,000 nutrition program” intended to lower the cases of stunted growth in children, Capistrano stressed that local government units must have the “political will” to solve the problem.

“Our government officials should have a sense of ownership of nutrition programs. They should stop saying it’s the sole responsibility of the Department of Health. Everyone is involved, and strong political will is important,” Capistrano said.

Zamboanga del Norte Provincial Health Officer, Dr. Eduardo Luayon said that the main concern is proper nutrition. “The food on the table is crucial, and we know that in remote areas there is no enough food,” Luayon said.

He added that the Provincial Health Office continues to hold seminars and capability building and seminars, particularly to mothers, because the intervention to lower the cases of stunted growth is from conception.