“Courtesy call lang po (It’s just a courtesy call),” Duterte aide Christopher “Bong” Go said in a text message at 8:44 pm, when asked about the general agenda of the meetings on Monday.

Videos of Duterte’s separate meetings with US Ambassador Philip Goldberg and UK Ambassador Asif Ahmad were made available to reporters around 4:50 pm on Monday.

(Watch parts of Duterte’s meeting with Goldberg below)

(Watch parts of Duterte’s meeting with Ahmad below)

The video of Duterte’s meeting with German Ambassador Thomas Ossowski was released to the media around 6:20 pm.

(Watch parts of Duterte’s meeting with Ossowski below)

The meetings happened at the so-called Malacañang of the South, or the Department of Public Works and Highways Depot Compound in Panacan, Davao City. 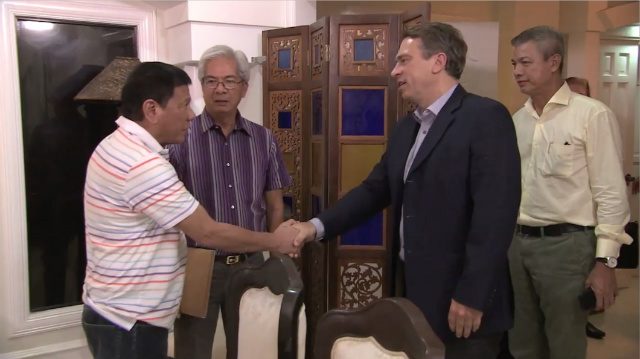 Duterte has met with other ambassadors, such as Chinese Ambassador to the Philippines Zhao Jianhua, after his landslide victory in the May 9 elections.

At the same time, Duterte has also made negative statements about other countries.

Before winning the presidency, for instance, Duterte warned that he is prepared to cut diplomatic ties with the United States and Australia after their ambassadors criticized his joke about the jailhouse rape of a missionary.

On June 2, he also cursed the United Nations for failing to solve the conflict in the Middle East and not helping the “black people” in Africa. – with reports from Agence France-Presse/Rappler.com