Duterte to Panelo: Farmers should get coco levy fund 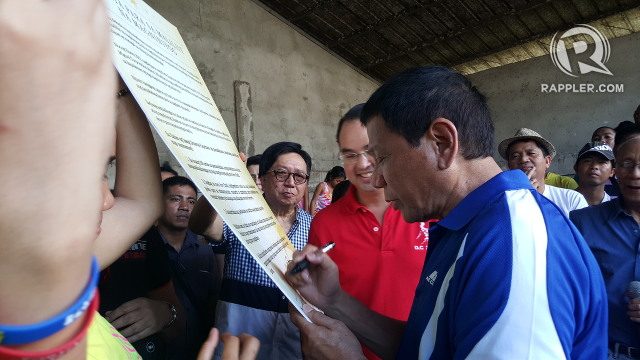 DAVAO CITY, Philippines – President-elect Rodrigo Duterte has ordered his incoming chief legal counsel, Salvador Panelo, to ensure the release of the coconut levy fund to farmers once the Duterte administration takes over on June 30.

Incoming Agriculture Secretary Manny Piñol disclosed this on Thursday, June 16, in a Facebook post after Duterte met his incoming Cabinet in Manila.

“I am directing Atty Panelo to look into this matter and make sure that the coconut levy funds are released to the farmers,” Duterte said, as quoted by Piñol, during their Cabinet meeting on Wednesday, June 15.

The coconut or coco levy refers to taxes collected from farmers during the Marcos administration. The coco levy had been meant to develop the coconut industry.

Marcos crony Eduardo “Danding” Cojuangco Jr used these funds, however, to buy businesses such as the United Coconut Planters Bank and the San Miguel Corporation.

In December 2014, the Supreme Court affirmed an earlier decision to give the coco levy fund to farmers.

In his Cabinet meeting on Wednesday, Duterte said: “This is an emotional issue for the coconut farmers, including my late mother. The coconut levy funds should be given to the farmers.”

During the campaign period, Duterte already promised to coconut farmers that they will benefit from the coco levy fund within his first 100 days in office.

Piñol said that aside from the directive to release the coco levy fund, another piece of good news for farmers is a new program he is planning.

Piñol said he already talked to officials of the Philippine Coconut Authority “for a 6-year coconut planting program to cover 600,000 hectares.”

He said that this “massive replanting of coconut in the country” aims to regain “the Philippines’ status as the number one coconut producer in the world.”

“With the expected release of the coconut levy funds to the real owners, and the start of the massive national coconut planting program, the coconut industry is expected to regain its reputation as one of the country’s biggest foreign exchange earners for the country,” the incoming agriculture secretary said.

Piñol is now in Davao City discussing his programs for farmers.

In March 2015, President Benigno Aquino III signed two executive orders to facilitate the utilization of the P74.3-billion coconut levy funds to benefit coconut farmers, EOs 179 and 180. This was supposed to be in fulfillment of his promise  to coconut farmers that he would work on mobilizing the funds pending the passage of the coconut levy bill.

Four months later, however, the Supreme Court stopped the implementation of the two EOs, acting on a petition filed by the Confederation of Coconut Farmers Organizations of the Philippines.

The group accused Aquino of committing grave abuse of authority when he issued EOs 179 and 180 without the approval of Congress and the anti-graft court Sandiganbayan.

The Coconut Farmers and Industry Development Act of 2015 is pending approval for second reading in the 16th Congress. – Rappler.com