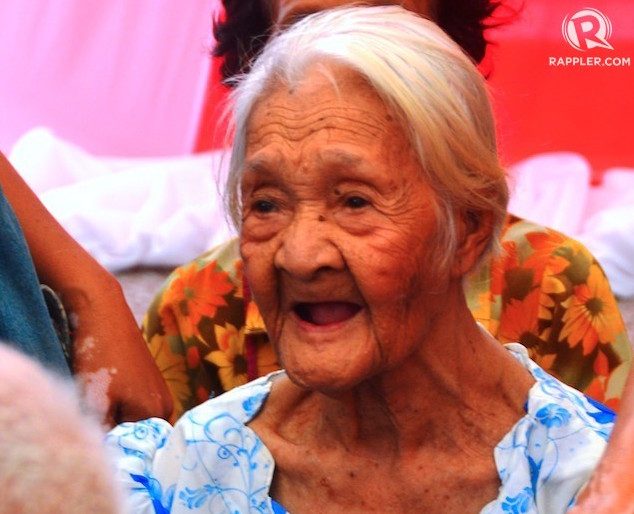 Facebook Twitter Copy URL
Copied
After rejecting it in 2013, President Aquino signs the bill giving cash incentives to centenarians into law, as it no longer contains the questionable provision

Albay Representative Edcel “Grex” Lagman, author of the measure, disclosed this on Monday, June 27. Lagman welcomed the President’s move, as the latter already rejected the bill in the 15th Congress.

“Just in the nick of time! I must say it was really a long wait but it was well worth the wait,” Lagman said in a press statement on Monday, June 27.

“In behalf of all the co-authors of the Centenarians Act, I would like to thank our President for giving it the green light at last. We are all happy that we are bidding the 16th Congress with a law that sends the message that we are a government that cares for its citizens,” he added.

The new law grants Filipinos – whether residing in the country or abroad – who reach 100 years old various rewards and incentives, including a cash gift of P100,000 and a letter of felicitation from no less than the President.

Based on Lagman’s estimates, around 7,000 Filipinos will benefit from the law.

They will also be awarded with a plaque of recognition and additional cash gift from their respective city or municipal governments during the National Respect for Centenarians Day, set on the first Sunday of October.

Aquino rejected the earlier version of the bill in 2013, particularly the provision which sought to increase to 75% the discount of goods and services to centenarians. (READ: Aquino: 82 bills rejected in 6 years)

In his veto message then, Aquino said that this rate “exceeds the usual mark-up rate of most businesses and will obliterate profit margins and result in capital loss.”

Now, Malacañang said Aquino approved the law as it no longer carries the questionable rate.

“Centenarians Act as enacted does not carry the provision about 75% value-added tax exemption which was the objectionable feature of the enrolled bill when it was first submitted to the President and vetoed in the 15th Congress,” Palace Communications Secretary Sonny Coloma said.

In 2013, former Albay Representative Edcel Lagman and then Senator Francis Pangilinan pointed fingers at each other on who was to blame for the presidential veto. (READ: ‘Bill-grabber senator blamed for veto of Centenarian bill)

Lagman claimed it was Pangilinan who added the provision at the last minute while the latter said it had the approval of Lagman, who claimed the House version only declared 50% – not 75% – discount for centenarians. – Rappler.com