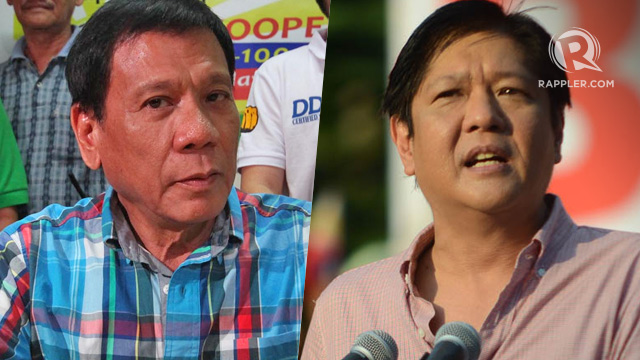 Go also confirmed that Marcos’ sister, Ilocos Norte Governor Imee Marcos, has been invited to the ceremony to be held at the Rizal Hall in Malacañang Palace.

Duterte is known for his close ties to the Marcoses, especially the son and namesake of the late dictator Ferdinand Marcos. (READ: Bongbong Marcos writes birthday poem for Rodrigo Duterte)

Aside from favoring Marcos’ proposed burial at the Libingan ng mga Bayani (Heroes’ Cemetery), Duterte also previously said that he was not keen on giving Vice President-elect Leni Robredo a Cabinet position because this might “hurt Bongbong’s feelings.”

The senator and Robredo were entangled in a tight vice presidential race. Robredo won over Marcos by a slim margin of 263,473 votes. (READ: Robredo wins as VP on late husband’s birthday)

Marcos, who cried foul over alleged cheating, is set to file an electoral protest against Robredo on Wednesday afternoon, June 29.

The incoming vice president will have a separate inauguration from Duterte. She will take her oath before two barangay captains at the Quezon City Reception House, the new home of the Office of the Vice President.

Duterte’s camp earlier said that not having a joint inauguration would benefit Robredo, as she can then invite many guests to her oath-taking.

Duterte initially said he wanted to keep his inauguration ceremony simple and invite only 150 guests. So far, his guest list already has 627 names. – with a report from Pia Ranada/Rappler.com