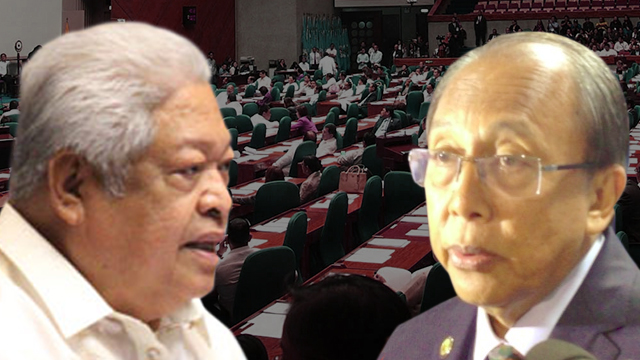 MANILA, Philippines – Albay 1st District Representative Edcel Lagman wants the Liberal Party (LP) to forge a minority coalition to stop the possible emergence of a “co-opted minority” that will allegedly be controlled by the majority bloc.

“The apprehension is that parties in the majority coalition would clandestinely ‘lend’ some of its members to a small group led by a representative who previously encamped in Davao City to secure the anointment of the new administration for his bid to become Minority Leader,” Lagman said in a statement on Sunday, July 3.

“The alliance of a supermajority and a subservient minority in the House is a chemistry fatal to the democratic processes,” he added.

He confirmed with Rappler on Monday that he was referring to Quezon 3rd District Representative Danilo Suarez of the United Nationalist Alliance (UNA).

“Almost everyone knows his adventurism in Davao City,” Lagman said in a text message.

The following lawmakers are mulling gunning for the minority leadership:

Only Suarez, however, is selling the idea to Davao del Norte 1st District Representative Pantaleon Alvarez that a minority bloc under his leadership would be “constructive” yet “supportive” of the administration of President Rodrigo Duterte.

(Our group has talked to Bebot Alvarez and we’re drumming the idea that is saying, “We should be the minority because we’ll be supportive. We’ll be constructive.”)

(If you give the minority to the Liberals, it will be like passing through the eye of a needle. They’ll give you a hard time, inch by inch.)

Suarez has flown to Davao City at least twice to meet with Alvarez, including the time Alvarez met with new lawmakers of the 17th Congress on May 18.

Prior to running under UNA, Suarez was a stalwart of former President Gloria Macapagal Arroyo’s Lakas-CMD.

In the 15th Congress, Lagman served as House Minority Leader from 2010 to 2012. It was agreed upon that he would share the position with his then-Deputy Minority Leader Suarez.

Lagman initially protested to give way to Suarez at the end of 2011, but the latter managed to become House Minority Leader from 2012 to 2013.

Lakas-CMD, the National Unity Party, the Nacionalista Party, and the Nationalist People’s Coalition have coalesced with PDP-Laban to form the so-called “supermajority.” At least half of the LP members in the Lower House also jumped to PDP-Laban.

In his statement, Lagman said he wants the remaining LP members to rally together with “similarly minded” party-list representatives and House members under different parties to forge the minority bloc.

He wants them to form a “reasonable, credible, and vigilant counterpoise” to the Duterte administration.

“I call on colleagues not to allow themselves to be pawns in a sinister plot to create a rubberstamp Congress,” said Lagman.

Suarez, however, is unfazed by Lagman’s statement.

“If he wants to run for minority leader, nobody is stopping him. Congressman Lagman has no monopoly of intention to serve Congress when everybody’s objective is to do the same,” he said.

“But I will fight him,” Suarez emphasized, saying it remains a numbers game.

He said they have about 15 to 16 lawmakers on their side, but UNA is yet to decide if they will join the minority bloc or the supermajority. – Rappler.com