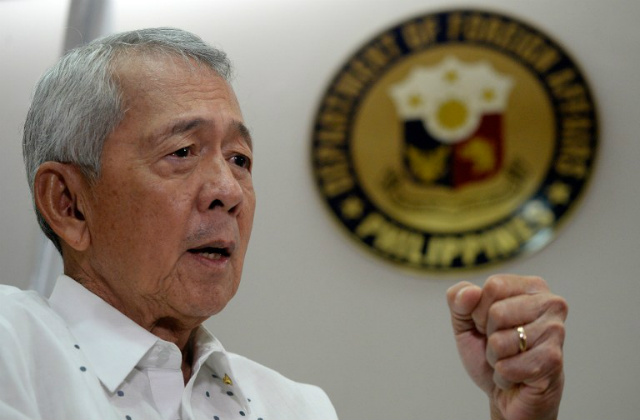 In a rare statement sent at around 6:20 am on a weekend, Yasay on Saturday, July 9, issued a “rejoinder” to an interview with him by international news agency Agence France-Presse a day earlier.

In his interview with Agence France-Presse on Friday, July 8, Yasay said the Philippines is willing to share resources in the West Philippine Sea.

“We can even have the objective of seeing how we can jointly explore this territory – how we can utilize and benefit mutually from the utilization of the resources in this exclusive economic zone (EEZ) where claims are overlapping,” Yasay said.

Yasay’s statement on Friday drew flak online, with critics saying the Duterte administration is set to give up the Philippines’ rights over the West Philippine Sea.

On Saturday morning, Yasay clarified, “What I said is, we have to wait for the ruling and study and dissect its implications.”

The Philippines’ top diplomat added: “As the ruling will not address sovereignty and delimitation, it is possible that some time in the future, claimant countries might consider entering into arrangements such as joint exploration and utilization of resources in disputed areas that do not prejudice the parties’ claims and delimitation of boundaries in accordance with UNCLOS.”

UNCLOS is the United Nations Convention on the Law of the Sea, or the so-called Constitution for the Oceans.

Under UNCLOS, a coastal state has the exclusive rights to explore and exploit marine resources in its EEZ, an area 200 nautical miles from its baselines.

UNCLOS is the basis of the Philippines’ historic case against China over the West Philippine Sea. The Permanent Court of Arbitration (PCA) in The Hague is set to announce the ruling on this on Tuesday, July 12.

The premise of Yasay’s statement was that the upcoming ruling will not tackle ownership of islands, among others (what he means by issues of “sovereignty”),  and the clarification of overlapping sea boundaries (what he means by “delimitation”) in the West Philippine Sea.

The case, after all, is not about ownership of islands but about the right to explore and exploit waters. It also does not tackle overlapping sea boundaries.

Given this, he said, claimant countries “might consider” sharing resources in disputed areas. These possible joint exploration activities, in any case, should “not prejudice the parties’ claims and delimitation of boundaries in accordance with UNCLOS.”

In a text message quoted by ANC, Yasay on Friday issued an earlier clarification to his statement to Agence France-Presse.

Yasay said, “Since the PCA does not have any enforcement powers, any overlapping claims awarded can be best implemented by negotiating for an agreement with other claimants that could possibly include the joint exploration and utilization of the resources in the disputed area.”

Reacting to Yasay’s clarification on ANC, a source privy to the Philippines’ case told Rappler: “Yasay still misses the point that if the tribunal rules there is no overlap, our EEZ is exclusively ours, and the Constitution prohibits any sharing of our EEZ resources with other countries, except that foreign companies can be contractors commissioned by the Philippine government.”

“China can be a foreign contractor commissioned by the Philippine government, just like Shell which is extracting the gas in Malampaya,” the source added.

Earlier this week, Yasay explained another statement he made about China.

At the Tapatan sa Aristocrat forum on Monday, July 4, Yasay said: “In my first official press conference last week, a reporter asked, ‘Are you afraid of China?’ In answer, I replied with a rhetorical question: ‘Why should we be afraid of China?’ The hall fell momentarily silent while reflecting a collective response.”

(Watch that portion of his first official press conference below)

That moment, Yasay said he remembered the words, “There is nothing to fear but fear itself.”

He added, “To paraphrase another world leader, let me say that we do not fear to negotiate, and we do not negotiate out of fear.”

Sources at the Department of Foreign Affairs (DFA) said his explanation on Monday, about fearing China, was written personally by Yasay. He also included this in his speech during his first Monday flag ceremony as DFA chief.

It was unclear if Yasay consulted other DFA officials about his statement on Monday. In the case of former DFA secretary Albert del Rosario, a source said Del Rosario always conferred with his colleagues first before releasing public statements, especially on contentious issues like the West Philippine Sea dispute.

Before his statements on Monday and Friday, Yasay’s comments during the first Duterte Cabinet meeting fueled concerns the new administration is afraid of China.

During their Cabinet meeting on June 30, Yasay referred to the Philippines’ possible victory in its case against China: “What if, in the face of these circumstances, China will dig in and put us to a test? They will disallow again our fishermen from fishing in Scarborough Shoal.”

Yasay, a former chair of the Securities and Exchange Commission, has no previous experience in the DFA. – Rappler.com