‘Victory’ rally in Manila ahead of South China Sea ruling 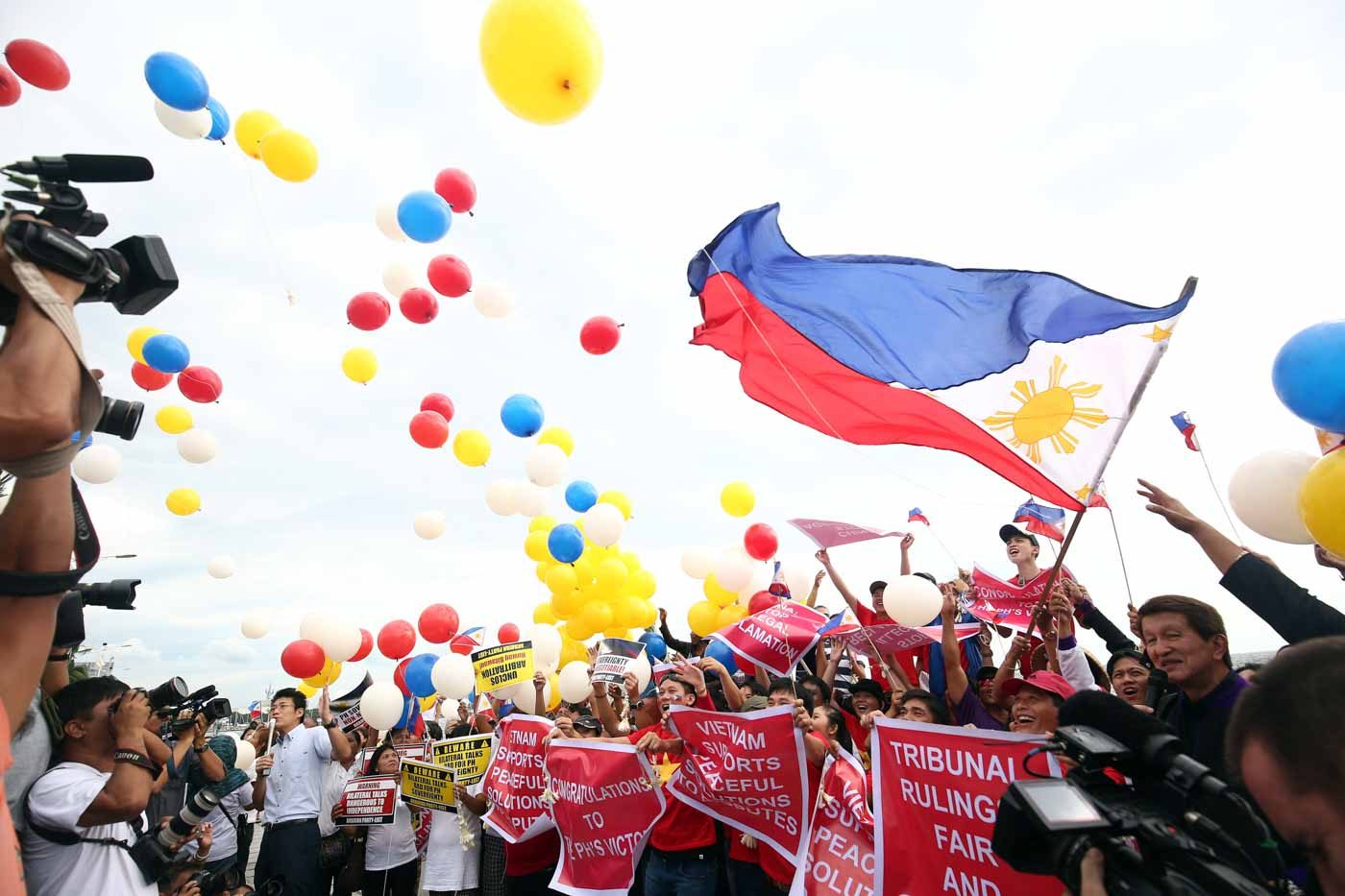 Facebook Twitter Copy URL
Copied
Advocacy groups are anticipating a favorable ruling for Manila, hours before the arbitral tribunal in The Hague hands down its ruling on the South China Sea dispute

MANILA, Philippines – Anticipating a favorable ruling in the South China Sea (West Philippine Sea) dispute, community leaders and advocacy groups held a “victory” party in Manila hours before an international court hands down its historic ruling on the Philippines’ case against China.

Members of the US Pinoys for Good Governance (USPGG), Marcha Contra Tsina, Akbayan, and Kalayaan Atin Ito, among other groups, waved flags and released balloons with the red, blue, white, and yellow colors of the Philippine flag along Baywalk in Manila.

On Tuesday, July 12, the Permanent Court of Arbitration in The Hague is expected to decide on the Philippines’ case, challenging China’s expansive claims over the West Philippine Sea (South China Sea).

Members of the Vietnamese Community in the Philippines (VCP) were also present in a show of support for their Asian neighbor. Vietnam is also locked in a dispute with China over portions of the South China Sea.

VCP spokesperson Amber Lee said the group is hoping for a favorable and impartial ruling from the court, adding that the ruling “may open up opportunities for other countries with territorial disputes with China to folllow.”

She also urged other countries with claims to the South China Sea to be united, citing Beijing’s continued refusal to recognize competing claims over the disputed territories.

“China had repeatedly said they would ignore the ruling and it’s not good for the nations. We need to be united and speak one voice,” Lee said.

Former National Security Adviser Roilo Golez, meanwhile, said he expects a “generally favorable” ruling from the tribunal, and expressed confidence that China will bow to world pressure to follow the court’s decision.

“We expect [China] to ignore it. But how long can they sustain ignoring the ruling of the arbitral tribunal if they’re going to be faced with the indignation of the international community of nations?” he said.

“We are not going to be intimidated by China. We hope and pray that the arbitral tribunal will confirm our maritime rights,” he added.

“That is the fight that made this thing work. That is the reason why, through diplomacy, we were able to buy time so that we are here today celebrating an official ruling that shows that the world has our back,” he said.

For his part, Eric Lachica, USPGG Washington DC coordinator, said that the group has reached out to President Rodrigo Duterte to suggest a “peaceful civilian solution” to the dispute.

The group is proposing that a “maritime peace zone” be created in the disputed areas, with the United Nations stepping in to administer the disputed shoals and artificial islands.

“We will win the legal side but we will have to win the cooperation of China,” he said.

The tribunal’s ruling comes 3 years after the Philippines filed its arbitration case to challenge China’s 9-dash line, which the Asian superpower uses to claim virtually the entire South China Sea.

The 9-dash line encroaches on the Philippines’ 200 nautical mile exclusive economic zone (EEZ), affecting Manila’s exclusive rights to fish in these waters. It also covers the high seas, which, under the United Nations Convention on the Law of the Sea (Unclos), are part of the global commons and are open to all states.

Since an April 2012 standoff between Philippine and Chinese vessels in the West Philippine Sea, tensions have escalated between the two countries, with China building artificial islands in the disputed areas. – Rappler.com