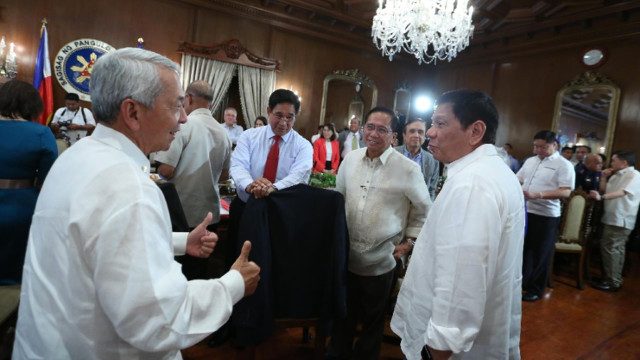 MANILA, Philippines – Key members of the judiciary who worked hard to file a case against China in an international court during the Aquino administration helped brief President Rodrigo Duterte on the historic West Philippine Sea ruling.

The meeting was held around an hour after the Permanent Court of Arbitration in The Hague, Netherlands announced the verdict in favor of the Philippines.

Justice Secretary Vitaliano Aquirre II confirmed to Rappler that the 3 were at the meeting. They explained to Duterte and the rest of the Cabinet how the Philippines “won in almost all of our submissions,” said Aquirre.

He did not elaborate when asked if any of the 3 made recommendations to Duterte on possible ways forward.

But Aguirre said the 3 “agreed to the tenor” of the statement made by Foreign Secretary Perfecto Yasay Jr earlier that evening.

The Cabinet had a “subdued victory celebration” that night, said Aguirre.

Presidential Spokesman Ernesto Abella, meanwhile, described the mood of the Cabinet meeting as “mature and responsible.”

“The ruling was welcome and the government will proceed with sobriety and restraint,” he told Malacañang reporters.

Carpio, Jardeleza, and Hilbay were part of the powerhouse Philippine team that flew to The Hague to defend the Philippines’ case against China over the disputed West Philippine Sea (South China Sea) in 2015.

Carpio, recognized as the foremost Filipino legal expert on the dispute, hailed the ruling as a reaffirmation of “the wisdom of the Philippine Constitution in renouncing war as an instrument of national policy, and in adopting international law as part of the laws of Philippines.”

Jardeleza and Hilbay, meanwhile, urged the Duterte administration to use the ruling as a “potent legal platform” for asserting the Philippines’ “maritime entitlements under [the United Nations Convention on the Law of the Sea].”

Only time can tell what Duterte’s next steps are over the West Philippine Sea.

He is to be given a “complete and thorough” interpretation of the 501-page ruling in 4 days.

But in his first Cabinet meeting, Duterte said he did not want to “flaunt” the ruling and preferred to make a “soft landing” in handling the issue.

He has vehemently opposed war against China, preferring peaceful means, even, and if necessary, bilateral negotiations with the Asian superpower.

Duterte – with his openness to share resources with China and serious consideration of proposals that China build railways for the Philippines – is perceived to be more receptive to China than his predecessor Benigno Aquino III.

It was Aquino’s administration that filed a case against Beijing on the maritime dispute. – Rappler.com