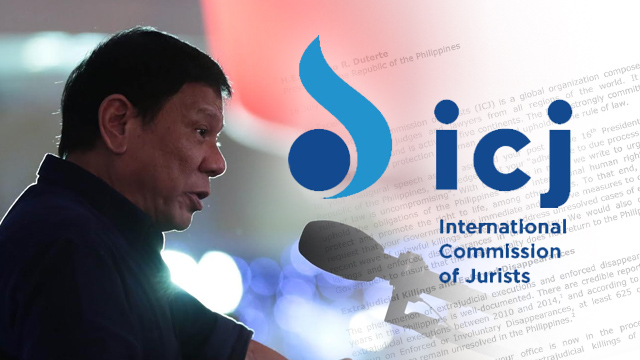 MANILA, Philippines – The International Commission of Jurists (ICJ) urged President Rodrigo Duterte to investigate and counter the “recent wave of unlawful killings” in the country.

“We…urge you to immediately conduct prompt and impartial investigations on the police operations that resulted in these deaths,” the commission said in an open letter dated Monday, July 18, and signed by ICJ Secretary-General Wilder Tayler.

“We also urge you to unequivocally denounce extrajudicial killings, whether of alleged criminals or of any person in the Philippines.”

Citing local reports, the ICJ said 136 suspected criminals have been killed between June 30 – the day Duterte was inaugurated – and July 11, while 84 people were killed during police operations, “many in an allegedly unlawful manner.”

But the commission, composed of 60 distinguished judges and lawyers from all over the world, reminded Duterte that the Philippines is a state party to the International Covenant on Civil and Political Rights.

“International law strictly prohibits the use of lethal force unless strictly unavoidable in order to protect life…. Where there are allegations of a violation of the right to life, there must be an independent and impartial investigation and those responsible must be brought to justice,” the ICJ said in its letter.

It expressed worry over the President’s statements “that appear to be encouraging extrajudicial killings of those engaged in the sale and distribution of illegal drugs in the Philippines.”

An investigation, according to the ICJ, would mean Duterte is really committed to what he said in his inaugural speech – that his “adherence to due process and the rule of law is uncompromising.”

The Duterte administration has intensified its crackdown on drugs in the country, with a campaign that has seen hundreds of alleged drug suspects killed in police operations and the surrender of over 60,000 alleged drug addicts. (READ: Rising number of users seeking drug rehab is a ‘happy problem’ but…)

But the ICJ welcomed the news that the Philippine government is already reviewing a draft of the administrative order that will create the presidential task force on media killings.

On Monday, the commission urged the Duterte administration to prioritize the prosecution of those allegedly behind enforced disappearances in the country, in compliance with the Anti-Enforced or Involuntary Disappearance Act of 2012.

“We expect the government of the Philippines to implement this commitment and take an important step toward eliminating impunity in the country…. We also urge your government to take immediate steps to advance the Philippines’ ratification of the International Convention for the Protection of All Persons from Enforced Disappearance.”

The ICJ also asked the President to reconsider his statements supporting the reintroduction of death penalty in the country, since, according to the commission, there is no evidence to prove that death penalty deters crime “at a greater rate than alternative forms of punishment.”

“The Philippines has been a regional leader on the abolition of the death penalty and…it is imperative that the Philippines maintain this progress,” the letter read.

“The ICJ considers the imposition of death penalty to be a violation of the right of life and the absolute prohibition of torture and other cruel, inhuman, or degrading treatment or punishment.”

Early this month, Duterte met with his allies in Congress and asked them to revive the death penalty, “especially for drug traffickers.”

Read the ICJ’s open letter below: