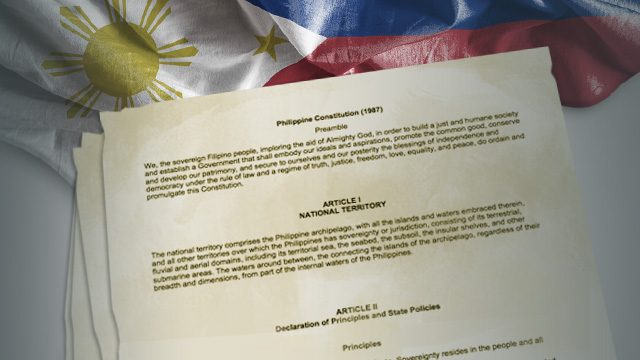 MANILA, Philippines – Amid the flurry of talk about changing the country’s Constitution, nearly half of Filipinos are saying they are opposed to it, survey results released Monday, August 1, showed.

The figures are roughly the same across geographic divisions as well as socioeconomic classes, the survey firm said in a press release.

Agreement to charter change is highest in the National Capital Region (NCR) and in Mindanao, both at 47%, and among members of class ABC, at 42%.

On the other hand, 58% of respondents in the Visayas said they do not agree with changing the Constitution.

In addition, less than half of Filipinos (41%) said they are aware of the talk about charter change. Among social classes, more people from class ABC said they knew about the issue, while 67% of respondents from class E said they only knew of it during the survey.

Knowledge about charter: Little to none

The Pulse Asia survey also revealed that a big majority of respondents in the survey said they have “little” to “no” knowledge of the Constitution.

Among all respondents, 73% said they have little or “almost none or no knowledge at all” of the Philippines’ most important law.

In contrast, only 27% of the total respondents said they have a “great deal” or “sufficient” amount of knowledge of the charter.

Among those who are aware of the proposals to change the Constitution, 44% said they know about what’s in the charter, as opposed to 56% who don’t.

The survey firm also asked respondents about the two main changes to the 1987 Constitution that are being floated: the shift to a parliamentary legislature and the move to a federal system of government.

“With regard the specific proposal to change the country’s form of government from a presidential one to a parliamentary form, 37% of Filipinos are against it, 33% are in favor, and 30% cannot say whether or not they support such a change,” Pulse Asia said.

NCR, Mindanao, and class ABC registered pluralities in favor of the proposed shift from the present presidential system into a parliamentary system of government, while the rest of Luzon and the Visayas had more people who said they are not in favor of it. Meanwhile, Pulse Asia said that among people who have knowledge of the Constitution, 41% are in favor of the proposed shift.

The survey firm also found that respondents are split 3 ways on the potential shift to a federal system of government.

“While 39% of Filipinos support the proposal to change the country’s unitary system of government to a federal one, 33% are against it,” Pulse Asia said. “Ambivalence on the matter is expressed by 28% of Filipinos.” The Ulat ng Bayan survey was done after the inauguration of President Rodrigo Duterte and Vice President Leni Robredo, the formation of the new Cabinet, the ramping up of the fight versus drugs, and the lead-up to the release of the decision on the West Philippine Sea (South China Sea) arbitration.

The survey was conducted using face-to-face interviews, the survey firm said. It has a +/- 3% error margin at the 95% confidence level. – Rappler.com