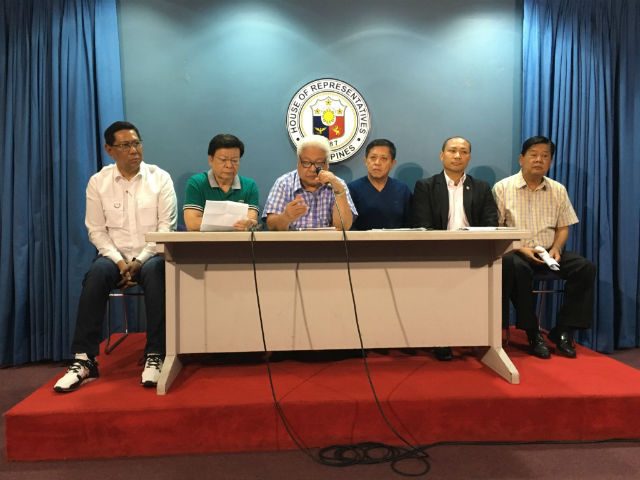 MANILA, Philippines – The so-called “legitimate and real” minority bloc in the House of Representatives said Filipinos who oppose Charter Change are giving lawmakers a lesson, showing them that they, too, can be critical of President Rodrigo Duterte.

In a press conference on Tuesday, August 2, Albay 1st District Representative Edcel Lagman cited the Pulse Asia survey that shows 44% of Filipinos are against amending the 1987 Constitution to pave the way for federalism. (READ: Will federalism address PH woes? The pros and cons of making the shift)

The congressman said this is worthy to note because there is opposition against one of the priority measures of Duterte even if he is enjoying a record-high 91% trust rating.

“This 44% is giving the leaders in Congress a lesson na kailangan may dissent dito sa Kongreso (that dissent in Congress is needed), constructive dissent, because that makes democracy alive. That is the lesson of the 44%,” said Lagman.

“Na kahit na 91% ang trust rating ng Pangulo, ‘wag na tayong matakot (That we should not be afraid even if the President has a 91% trust rating). Let us not procrastinate. Let us not be discouraged in making critical comments on the statements and directions of the present administration,” he added.

It is a hit against the 251 members of the House supermajority, composed of 100 of Duterte’s party mates from the Partido Demokratiko Pilipino-Lakas ng Bayan and the other parties that have coalesced with them.

Lagman’s 8-person group previously alleged that the supermajority is attempting to fully control the House so Duterte’s pet bills will be passed.

They claimed that the supermajority is doing this by conspiring with the minority bloc led by newly-elected House Minority Leader Danilo Suarez.

Lagman’s group has since decided to break away from Suarez’ minority bloc and called themselves the “Legitimate 8” who would provide checks and balances in the lower chamber.

Apart from Lagman, the “Legitimate 8” bloc is composed of:

The House leadership is currently supporting Duterte’s preference for a Constituent Assembly over a Constitutional Convention (Con-Con) to amend the charter.

In the first, Congress converts itself into a body that would draft the amendments. In a Con-Con, a separate body is elected or appointed to do the same task.

A Constituent Assembly has since been under fire because lawmakers and analysts said incumbent legislators would only prioritze their own agenda.

Con-Con purely elected by the people

The “Legitimate 8” minority bloc prefers to amend the Constitution through a Con-Con because they said this mode would be less influenced by the House supermajority.

They also said legislators would not be distracted from performing their primary tasks of passing bills if they do not convene as a Constituent Assembly.

“A Con-Ass (Constituent Assembly) is just a rubber stamp of the government considering that as early as now, we are already compromised. Compromised by time constraints because we have other concerns. Second, we are compromised because we need projects in our districts,” said Erice.

Unlike most Con-Con bills passed in the 17th Congress, however, the “Legitimate 8” bloc wants a Con-Con delegation purely elected by the people, with no appointments by the President. (READ: How do you want to elect your Con-Con delegates?)

“It is always suspect when you appoint, considering that who will appoint and the appointees may be subservient to the appointing authority. Let us have an independent Constitutional Convention with duly elected representatives,” he added. – Rappler.com