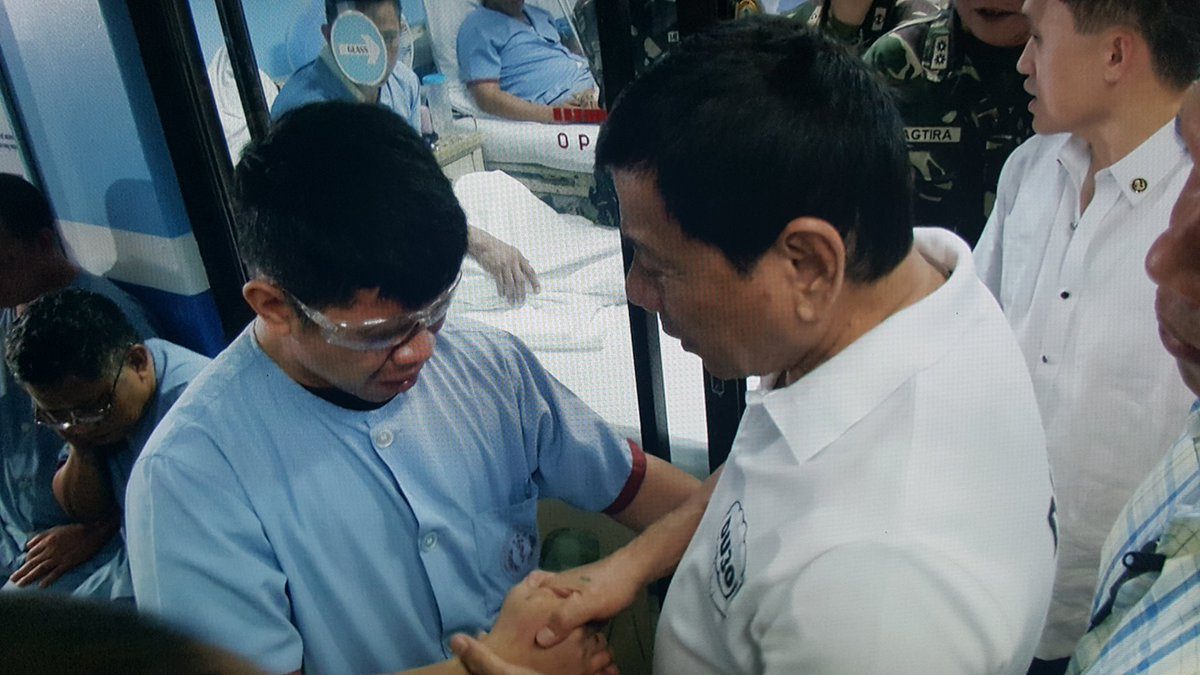 Facebook Twitter Copy URL
Copied
Jerome Jacuba is hugged by President Duterte who himself becomes emotional. The 28-year-old 2nd lieutenant was blinded when shrapnel exploded near his eyes in early March.

MANILA, Philippines – President Rodrigo Duterte himself was moved to tears upon meeting a young blind soldier at a military hospital on Tuesday, August 2.

Jerome Jacuba was just one of the 69 patients at the Armed Forces of the Philippines Medical Center who came face-to-face with Duterte.

Jacuba could not keep his emotions at bay as the President approached him.

After Duterte saluted him and shook his hand, he pulled Jacuba into a long hug. The soldier was shaking with emotion but the President too was moved. Duterte had tears in his eyes and sniffled after the hug.

Jacuba is a 28-year-old 2nd lieutenant who was blinded when shrapnel exploded near his eyes during a clearing operation in early March in Bgy Datu Salita in Maguindanao, said army doctor William Recuenco.

The blast, which came from an improvised explosive device or IED, caused his right eye to rupture and damaged his left eye.

All Jacuba can see now are light impressions.

Recuenco says Jacuba has no chance of being able to see again. He is now learning how to read Braille.

Jacuba, an exemplary officer, is awaiting promotion to the rank of first lieutenant.

His experience highlights the extraordinary risks taken by the country’s soldiers, risks Duterte never forgets to mention when he speaks in front of troops.

He has also closely interacted with soldiers wounded in action in the Western Mindanao Command’s hospital in Zamboanga City.

Duterte has dropped by 6 military camps in 9 days, giving pep talk-style speeches in front of troops and meeting with military officials.

During these visits, he consistently declared his devotion to the armed forces and vowed to give them all the support they need. – Rappler.com