House has ‘no jurisdiction’ over mayor-turned-congressman on Duterte list 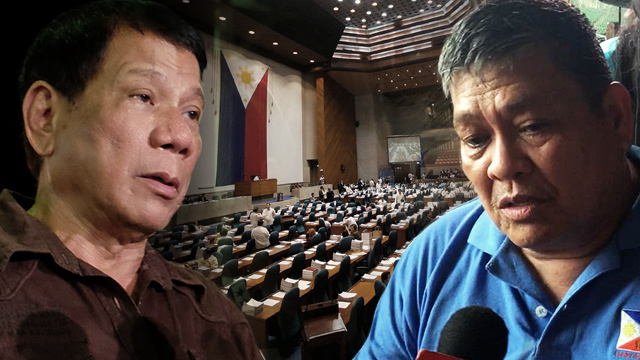 MANILA, Philippines – House Majority Floor Leader Rudy Fariñas said that the House of Representatives has no jurisdiction over an incumbent lawmaker tagged as allegedly involved in the drug trade when he was still mayor.

Celeste, however, was listed as a former mayor of Bolinao, Pangasinan. He had been mayor before he became a 3-term congressman from the 15th until the present 17th Congress.

“Rep Celeste is now on his 3rd term as House member, which started in 2010. His name was mentioned as a ‘mayor,’ which obviously was his position before he became a House member,” Fariñas told Rappler in a text message.

“The HOR has no jurisdiction over his acts or omissions allegedly committed before he became a representative. Hence, he has nothing to explain to the HOR,” Fariñas added.

Some of the officials part of Duterte’s list have surrendered at Camp Crame.

Rappler has asked Celeste’s office for comment, but he has not replied as of posting time.

“I think he knows what to do. He is a member of the House so siguro pupunta siya kay (so maybe he will go to the) Speaker and explain his side, and for us, we do not have to do anything yet because we do not know what the problem is with him,” said Singson.

Asked if Celeste can expect any form of assistance from the House leadership, Singson said: “I don’t think so.”

Celeste is the only sitting representative among the more than 150 personalities named by Duterte as having links to the drug trade.

JC Rahman Nava was a former Guimaras representative while Guillermo Romarate Jr used to be congressman for Surigao del Norte during the 16th Congress. Jeffrey Celis, who was identified as a party-list representative by Duterte, is actually the chairperson of Bayan.

A cop who passed away 6 years ago and a judge who died in 2008 were also part of Duterte’s list.

What would the House leadership do if an incumbent lawmaker is named by Duterte?

Deputy House Speaker Miro Quimbo said they have yet to discuss it.